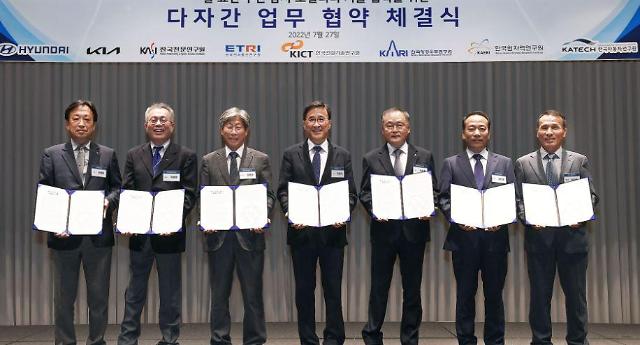 While developing technologies required for lunar exploration mobility, the consultative body will consider specific strategies and measures to operate mobility on the moon, Hyundai said.

The auto group said it has formed a separate in-house consultative body involving key personnel from Robotics Lab and other group units in the field of software and hardware design, space environment response, and special equipment.

Hyundai and government-funded research institutes would mobilize all of their capabilities to develop and combine technologies for the successful mission of lunar surface exploration mobility that requires the development of mobility fuselage and technologies such as science exploration equipment, software for operation, and space communication functions.

The auto group said that the consultative body will be able to innovatively improve the durability and completeness of technologies in the process of developing mobility that can be operated in the extreme environment of the moon. "We have taken the first step to make the vision of robotics and metamobility a reality that Hyundai Motor and Kia have presented to customers," an unnamed Hyundai official said in a statement on July 27.

South Korea has presented an action plan to develop a lunar lander weighing more than 1.5 tons that would carry out scientific research on the surface of the moon in the early 2030s, along with the development of a launch vehicle called "KSLV-III" that can thrust bigger payloads for lunar or Mars exploration using a mixed fuel of liquid oxygen and kerosene. The first launch of KSLV-III may come in 2030.

South Korea's first lunar orbiter, the Korea Pathfinder Lunar Orbiter (KPLO), will be launched on August 1 on SpaceX's Falcon-9 at Cape Canaveral Air Force Station in Florida. The orbiter is to settle in orbit around the moon on January 1, 2023. After a test drive for a month, various missions will be carried out by December 2023.

KPLO will roam around the moon and look for candidate sites for the landing of South Korea's first lunar lander. A high-resolution camera will be mounted on KPLO to film candidates for landing. If successful, South Korea will be the seventh country to launch a lunar orbiter, after the United States, Russia, China, Japan, the European Union and India.