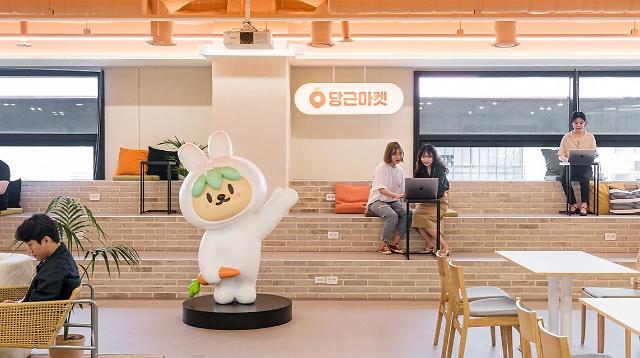 SEOUL -- Having a job located right next to the home is any worker's dream. South Korea's popular mobile secondhand platform operator Danggeun Market is fulfilling the dream of every job seeker with a part-time job-seeking service that will provide information about nearby businesses within a radius of about 700 meters (0.4 miles).

According to Seoul City, an average Seoulite spends some 110 minutes commuting. About 30 percent of people who moved their homes in 2020 are located in areas close to their worksites. Seoul said the happiness level of workers was the highest among those who live within a five-kilometer radius from their workplaces.

Danggeun Market released a close vicinity job-seeking feature through its mobile app on August 1. The app will show users jobs within a radius of 700 meters or a 10-minute walk.

"We have created this service for job seekers who favor jobs at nearby locations," Danggeun's part-time job division manager Baek Byung-han said in a statement. The service will help business operators seeking part-timers who would work for an extended period.

Since its launch in 2015, Danggeun Market has become the most popular secondhand trading platform in South Korea, listing posts uploaded by users who live in the same city district or neighboring districts.

The platform became a trustable secondhand market and matches users living within a radius of six kilometers so that they can meet, check the product that they are trading, and make payments using cash, online money transfer, or a digital wallet payment system. Danggeun launched its beta service in the United States in 2020 and in Japan in 2021.