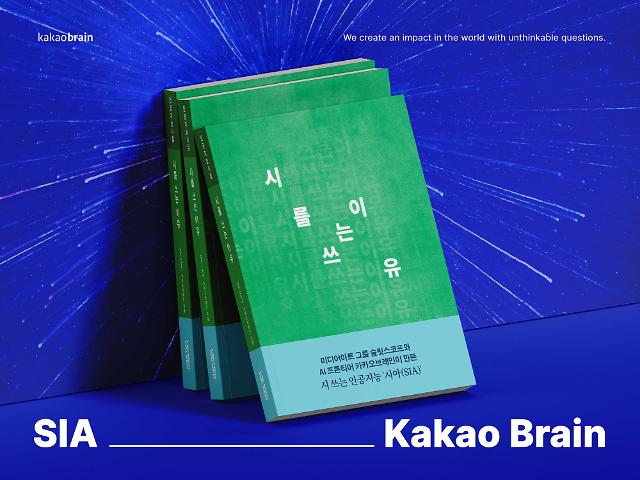 
SEOUL -- SIA, an AI model that writes poetry, will make its debut in South Korea's literary world by releasing the first collection of 53 Korean-language poems through offline bookstores in what was described by trainers and engineers as a "dangerous" attempt to see how people would think and whether they can accept it as art or recognize AI as an artist.

SIA will publish its first collection of poems, "The Reason for Writing Poems," on August 8, in a joint project by Kakao Brain, the AI research unit of South Korea's web service company Kakao, and Slitscope, a domestic media art group.

Using KoGPT, a Korean-language AI platform, SIA has learned how to write poems by reading 13,000 poems, Kakao Brain said, likening the AI model to a "real poet" who understands the context of entered information and immediately writes a poem, when the subject and command entered.

KoGPT, a hyperscale open-source AI model developed by Kakao Brain,  performs tasks such as the summary of long sentences, the prediction of conclusions, and understanding context to answer questions. Because writing is automatically possible depending on the context, high-level language tasks can be solved and used in various fields.

"By publishing a collection of poems, we confirmed the infinite artistic possibilities of KoGPT," Kakao Brain CEO Kim Il-du said in a statement. "We will continue exploring the contacts in various cultural and artistic fields where Kakao Brain's super-scale AI model can be utilized."

Slitscope founders regard SIA as a "dangerous" attempt to see how people would appreciate SIA's writing and ask whether they can accept it as art and recognize AI as an artist. They think it is not much different from the process of acquiring and writing experiences, emotions, and knowledge of poetry, except that everything was learned through language.

Slitscope trimmed prepared poetry data for easy use, filtered out special symbols that AI cannot recognize, and inserted special symbols that distinguish the stanza and line of poems. The task of generating and tuning poems has been repeated for in-depth learning, which is similar to the process of teaching children. Slitscope used Google Cloud's product with four NVIDIA A100 GPUs that deliver unprecedented acceleration at every scale to power the world's highest-performing elastic data centers for AI.

minDALL-E is a text-to-image generation model trained on 14 million image-text pairs. The AI model is capable of understanding the context of the users’ requests and creating a whole new image.

Kakao Brain's high-level digital human technology makes people feel comfortable beyond the uncanny valley, which is a hypothesized relationship between an object's degree of resemblance to a human being and the emotional response to the object. The concept suggests that humanoid objects that imperfectly resemble actual human beings provoke uncanny or strangely familiar feelings of uneasiness and revulsion in observers.