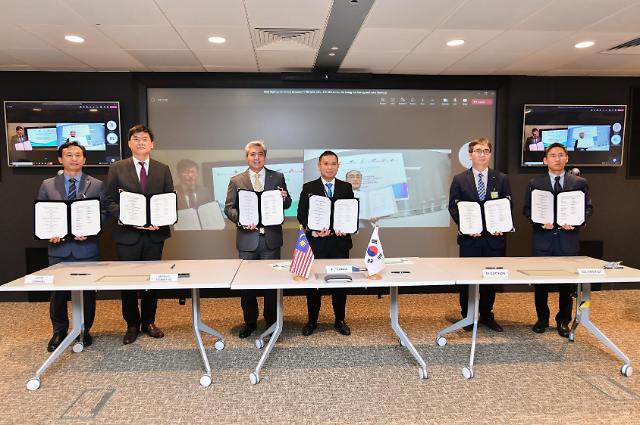 SEOUL -- Petronas, a Malaysian state oil and gas company, joined hands with six South Korean companies to push for a cross-border project that will store captured carbon dioxide near an oil block off the northwest coast of Borneo. Malaysia was seen as the best location considering its carbon storage capacity and geographical accessibility.

The Shepherd CCS project is aimed at securing stable overseas carbon storage space, SK energy, an oil refining company in South Korea, said, adding that carbon emitted by companies at an industrial complex in South Korea will be captured and transported to Malaysia.

A feasibility study will be conducted to find a proper location for storage near an oil block called "SK427" off the coast of Sarawak. Under a production sharing contract with Malaysian companies in April 2022, SK earthon is responsible for exploration, development and production in the block.

SK energy and five other South Korean companies signed a memorandum of understanding with Petronas on August 2 in Kuala Lumpur for cooperation in Asia's first hub project to develop an entire value chain for carbon capture and storage (CCS).

Samsung Engineering will be in charge of business development. SK energy, Lotte Chemical, and GS Energy will handle carbon capture. Samsung Heavy Industries, a major shipbuilder, is responsible for transportation. SK earthon and Petronas will explore, select and operate a storage site.

The project is significant in that it develops an entire value chain at once. Participating companies will seek to expand their businesses through the participation of other companies, as securing overseas storage is essential due to a lack of carbon storage space in South Korea, SK energy said in a statement.

"This feasibility study will identify technologies suitable for CCS and a transport value chain and help Malaysia establish itself as a leading CCS solution hub," Petronas' carbon management head Emry Hisham Yusoff was quoted as saying.