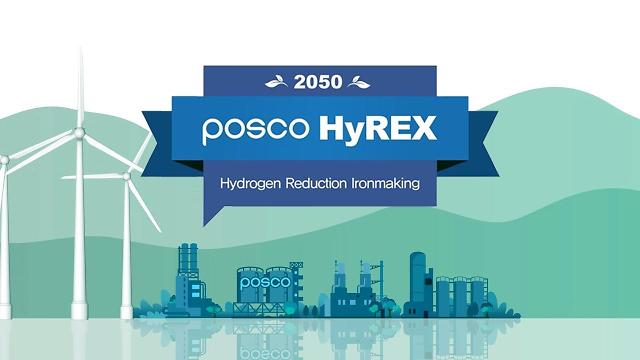 HyREX is more cost-efficient than the method adopted by European steelmakers that put iron ore processed in the form of beads and add heated hydrogen from the bottom. As hydrogen and oxygen in iron ore react, the reduced iron descends and water vapor flies upward.

POSCO and Primetals will design a HyREX demonstration plant soon to verify the possibility of commercialization by 2030. The existing blast furnace will be gradually replaced with HyREX-based facilities to achieve carbon neutrality by 2050.

POSCO is developing the HyREX model based on FINEX that produces molten iron directly using iron ore fines and non-coking coal. The FINEX method that uses 25 percent of the hydrogen is claimed to produce fewer pollutants such as carbon dioxide.

POSCO nurtures green hydrogen as one of its new growth engines. The group aims to produce up to 500,000 tons of blue hydrogen by 2030 and complete a five-million-ton green hydrogen production system by 2050. In August 2021, POSCO teamed up with its Australian raw material supplier Roy Hill Holdings, to develop an optimal hot briquetted iron (HBI) production system. HBI produces steel products after making reduced iron without carbon dioxide emissions by using hydrogen as a deoxidating agent.