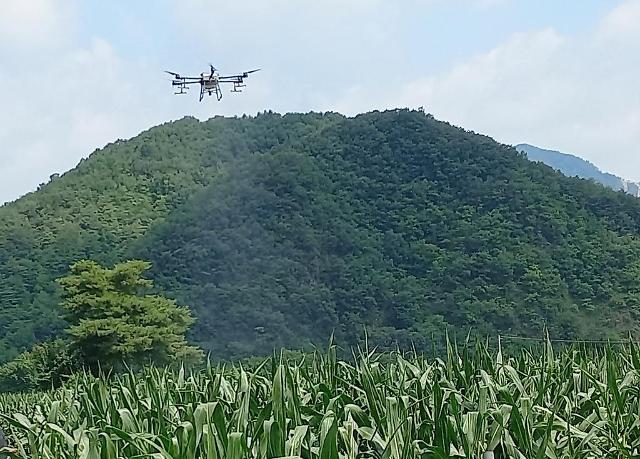 SEOUL -- A pest control drone designed to reduce labor costs and time was demonstrated on a corn farm in the northeastern county of Yeongwol famous for crops such as corn, chili pepper, and potatoes. The demand for pest control drones is rapidly increasing in Yeongwol, an aging county suffering from manpower shortages.

Yeongwol with a population of some 38,000 is a super-aging society in which about 22 percent of the population consisted of elderlies aged 65 or older as of August 2021. Data released by Yeongwol showed that the adoption of drones can save 132,000 won ($101.7) per hectare, reduce the labor force by about 30 percent, and time by 1,500 percent. A hectare is equal to 10,000 square meters.

To replace human workers, a drone was demonstrated in western Yeongwol using a pest control drone on August 14. The county officials discussed expanding the use of drones in other sectors.

Drones were mostly used to replace dangerous missions in the early days of their commercial introduction, but they are now used in other sectors including food delivery. In December 2021, smart farm drones that can analyze crops' temperature and humidity were showcased in Chuncheon City located east of Seoul.