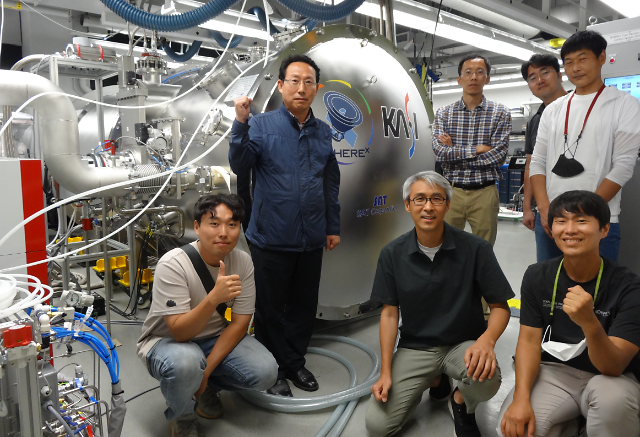 
SEOUL -- A cryogenic vacuum chamber produced by South Korea's national research institute for NASA's space telescope project has been installed at a U.S. ground test site to verify the performance of SPHEREx, a near-infrared space observatory that will use a spectrophotometer to perform an all-sky survey.

The chamber is an important device in the SPHEREx project. It has been developed by the Korea Astronomy and Space Science Institute (KASI). SPHEREx, which is designed to measure the near-infrared spectra of approximately 450 million galaxies, is targeted to launch no earlier than April 2025 on a Falcon 9 launch vehicle for its planned two-year mission.

The chamber implements a cryogenic vacuum of minus 220 degrees Celsius or less and holds infrared light similar to the wavelength of the light emitted by the celestial body to test the cooling and optical performance of telescopes and cameras, according to the Ministry of Science and ICT.

Scientists will conduct a test in the first half of 2023 at the California Institute of Technology. "Through this successful joint development with NASA, our space technology in the cryogenic performance testing of infrared space telescopes can also leap to the level of advanced countries," Jeong Woong-seob, a senior KASI researcher, said in a statement.

KASI has also developed loading equipment that can safely insert SPHEREx, and a device that flattens infrared light to measure wavelength and focus at cryogenic temperatures.