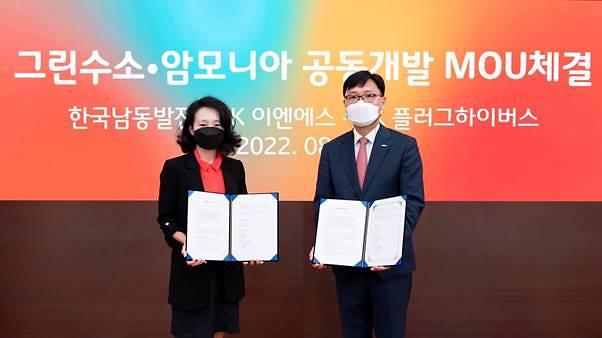 Ammonia is seen as an ideal resource to establish an eco-friendly hydrogen fuel cell-based infrastructure. Green hydrogen can be produced through electrolysis to split water and release only hydrogen and oxygen.

PEM fuel cells are mainly used for transport applications and small-sized power generation facilities as they operate in relatively low temperatures. PEM consists of a polymer electrolyte membrane sandwiched between a positive electrode (cathode) and a negative electrode (anode).

SK E&S regards the partnership with KOEN as the cornerstone of securing overseas hydrogen supply chains in preparation for the global transportation era of green hydrogen. "We will jointly review various domestic and international cooperation opportunities related to the production and introduction of green hydrogen and ammonia," SK Plug Hyverse CEO Lee Ji-young said in a statement on August 18.

in May, SK Plug Hyverse signed a contract with Korea Gas Corporation (KOGAS) to supply a 1.0-megawatt PEM water electrolysis facility that uses a wind power plant to produce green hydrogen and supply it through a charging station on the southern island of Jeju.

Because hydrogen fuel cell power generation systems are much smaller than thermal power plants or hydropower plants, they are ideal for providing power to microgrids, which are networks of small, isolated smart power grids, in urban environments. PEMs can be applied to stationary and portable fuel-cell applications due to their high energy efficiency, simple structure and excellent durability.