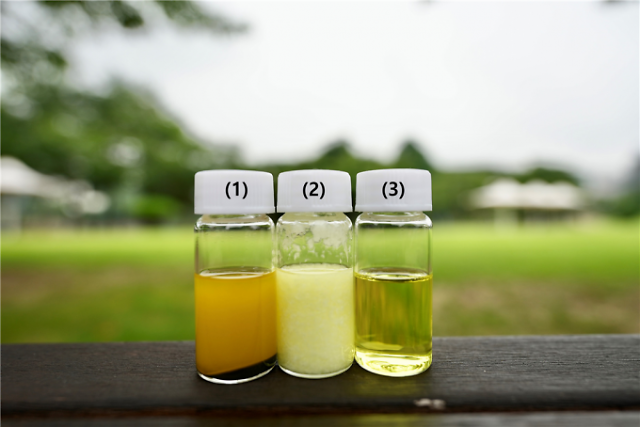 SEOUL -- Toxic solvents were seen as an obstacle to the commercialization and mass production of next-generation perovskite solar cells that enable ultrathin films to absorb the complete visible solar spectrum, leading to the creation of low-cost, efficient, thin and flexible modules.

A research team led by Seok Sang-il with an unrivaled record in the development of perovskite solar cells has worked out an ethanol-based perovskite precursor solution by designing a complex compound structure so that perovskites can be dissolved well in ethanol. It is possible to manufacture a perovskite thin film uniformly and densely.

"It was possible to manufacture a perovskite thin film with high density, uniformity, and excellent crystallinity by optimizing a combination of binders that can control the speed of volatilization with a solvent during coating and thermal treatment," said Seok, a professor of energy and chemical engineering at the Ulsan National Institute of Science and Technology (UNIST).

"Perovskite solar cell research has focused on improving efficiency and stability, but now it is more important to conduct research on the foundation for commercialization to reduce or eliminate the use of toxic solvents," Seok said. "This study is the starting point for solving such a problem."

The deposition of dense and uniform α-formamidinium lead triiodide (α-FAPbI3) films was possible using perovskite precursor solutions dissolved in an ethanol-based solvent, Seok's team said in a research paper published on the website of Nature Energy, a peer-reviewed scientific journal.

The combination of dimethylacetamide (or dimethylsulfoxide) and an alkylammonium chloride in ethanol resulted in the stable solvation of FAPbI3, the paper said, adding that it's possible to form "very dense and uniform" α-FAPbI3 perovskite films with high crystallinity by combining several types of alkylammonium chloride.

Unlike silicon solar cells, which are restricted from installation locations, perovskite solar cells can be installed on the exterior walls of buildings or on the sunroof of vehicles. South Korean companies and researchers have tried to develop new technologies such as tandem cells that build perovskite on top of silicon solar cells. Tandem solar cells can be individual cells or connected in series, which are simpler to fabricate but the current is the same through each cell.

Seok's team opened a joint laboratory with South Korea's Hyundai auto group in June 2022 for a three-year study to develop high-efficiency, large-area perovskite-silicon tandem cells and apply them to vehicle roofs containing solar panels, which are a relatively new phenomenon that promises to use renewable energy to add some charge to car batteries.