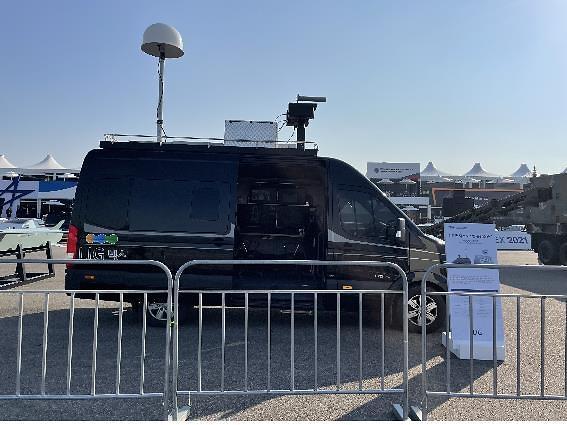 SEOUL -- In line with a government project to neutralize threats by drones and unmanned aerial vehicles, LIG Nex1, a defense contractor in South Korea, will push for the development of a jammer that disturbs control signals and get them off course and into a crash.

Drones and unmanned aerial vehicles are widely used on battlefields and for reconnaissance because of their versatility and costs. A war between Russia and Ukraine has highlighted the tactical value of applying countermeasures to bring down drones penetrating protected perimeters.

LIG Nex1 said it has proposed the development of drone jammers, citing the accumulation of technologies for navigation jamming, radio jamming and control network jamming equipment. The company has demonstrated technologies through the demonstration of an anti-drone system that has disabled more than 500 drone flights for two years from 2020.

If completed, LIG Nex1 said its anti-drone system would play a major role in improving the competitiveness of South Korea's defense industry and heighten the possibility of exports.

South Korea has launched a military project to deploy reconnaissance drones, communication relay drones, attack drones and UAVs that would monitor battlefields and collect map data for precise artillery attacks in real-time from high altitudes. LIG Nex1 has been involved in the development of attack drones that can accurately destroy targets, installed with detection, explosive and anti-jamming devices using infrared cameras and laser distance measuring devices.

In April 2021, a consortium led by the state-run Korea Atomic Energy Research Institute (KAERI) was selected for a five-year government project to develop an intelligent drone cop system that could find and neutralize illegal drones threatening the safety of nuclear power plants, airports and other crucial facilities.

A ground-based system finds optimal measures to identify and neutralize illegal drones in restricted flight zones by using systems such as communication jamming and GPS spoofer. Drone cops would use net capture and high-speed collision, followed by an investigation through forensics-based evidence analysis. The ministry would upgrade technology to establish a system capable of coping with drones equipped with weapons.