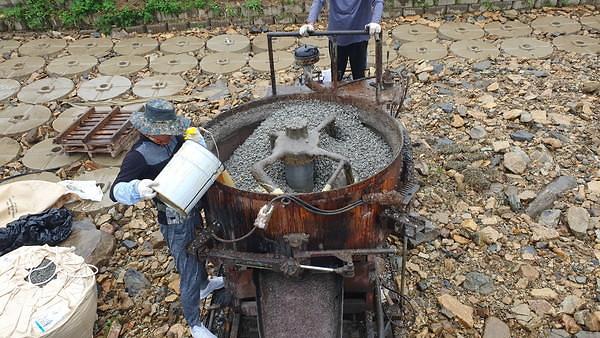 [Courtesy of Korea Institute of Civil Engineering and Building Technology]

SEOUL -- Due to climate change, unexpected torrential rains are more frequent than before, heightening the risk of floods. To slow down or prevent the collapse of river and stream embankments, South Korean researchers have developed a technology to reinforce the surface of embankments by mixing aggregates and eco-friendly biopolymers extracted from plants.

Biopolymers act as an adhesive and coating agent to secure strength and prevent soil loss even at high water pressure and fast flow. It can be easily constructed and reduce construction and maintenance costs, according to the state-run Korea Institute of Civil Engineering and Building Technology (KICT).

Biopolymers with applications in many fields are natural polymers produced by the cells of living organisms. Due to their eco-friendly characteristics, the use of biopolymers could create a sustainable industry. So far, reinforcement has focused on preventing the collapse of the river-side embankment slope, but KICT said that there has been no efficient method to prevent the collapse of the embankment slope on the side of villages and agricultural land.

A KICT research team found that mixing biopolymers with aggregates can safely protect the embankment without the erosion of surface soil and material separation even under high water pressure and fast flow conditions during flooding. Since eco-friendly materials can activate vegetation, it is possible to restore river ecological functions and maximize durability.

Through empirical experiments that reproduced flooding, researchers have confirmed the field applicability and stability of their technology. In a performance test, a soil embankment collapsed in 15 minutes and a grassed vegetation embankment in 30 minutes when researchers flowed six tons of water per second. However, biopolymer-based embankments did not collapse for four hours. In an experiment that reproduced the same type of situation as stream flooding, KICT said that the collapse did not occur for six hours. Such a result can secure sufficient time for evacuation and repair.

"The embankment collapse prevention technology using eco-friendly biopolymer materials is meaningful as it is not only a safety technology capable of preventing flood damage but also a result of fusion research responding to environmental issues such as carbon neutrality," KICT head Kim Byung-suk said in a statement on August 23.

In early August, a record downpour in 80 years battered South Korea, inundating homes, cars, buildings, and subway stations and leaving eight people dead and six others missing. In Seoul's southern district of Dongjak, the amount of precipitation per hour peaked at 141.5 mm, the greatest amount since 1942.