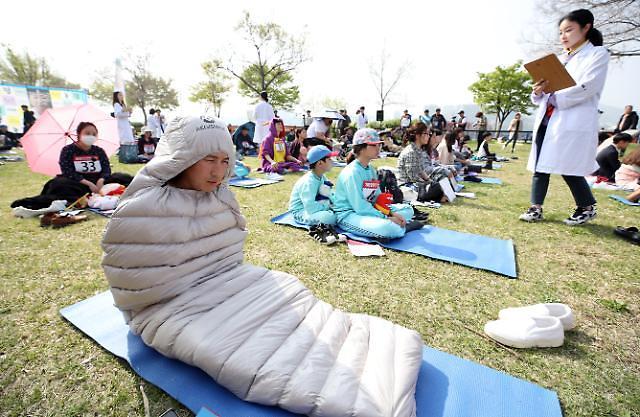 SEOUL -- A reception desk for applicants to participate in a river-side "space out" contest in South Korea was forced to shut down early due to high competition. The fun event has been almost forgotten for two years since it was suspended due to a COVID-19 pandemic.

The contest to be held on September 4 in a park near a bridge over the Han river that flows across the center of Seoul is designed to break the stereotype that doing nothing is worthless. Indeed, it can help improve creativity as part of the brain is activated when it is not stimulated from the outside.

Organizers opened their reception desk for a week from August 22 to select 50 teams, but the desk was closed in two days because an unexpectedly high number of people estimated at 3,800 applied.

Participants are required to stare into the void for 90 minutes without saying anything. There is no need to feel nervous about doing nothing because there will be dozens of others silently sitting, lying down or relaxing in intricate postures. Anyone found to be dozing off or doing other than doing nothing will be dragged out.

They can express their intention with color cards to receive the service they want -- a red card for a massage service, a blue card for water, a yellow card for fanning, and a black card for other inconveniences. The winner will be selected by evaluating the heart rate and an on-site vote by citizens. Organizers will give scores based on heart rate graphs measured every 15 minutes. The first, second, and third place will be determined by adding up ballots cast by citizens.

After the competition, there will be sitar and jazz guitar performances. "I hope people empty their minds for a while and shake off the stress and depression they experience in their daily life such as COVID-19," said Yoon Jong-jang, a Seoul city government official.

The contest that began as modern performance art by Woopsyang, a performance artist, in 2014 has now become international. Contests have been held in Beijing, Rotterdam, Taipei and Hong Kong. The competition gained attention in 2016 when Crush, a South Korean artist known for his Jazz-based music, won first place. Crush said he wanted to give his brain a break as he released an album at the time.

Marcus E. Raichle, a neurology professor at the Washington University School of Medicine in Saint Louis, discovered that the default mode network, a group of brain regions, becomes active when a person is not engaged in any activities. The brain is stimulated when people work, watch TV and play video games. The brain must rest from such activities to organize information more efficiently. About 15 minutes is helpful in improving memory and creativity.