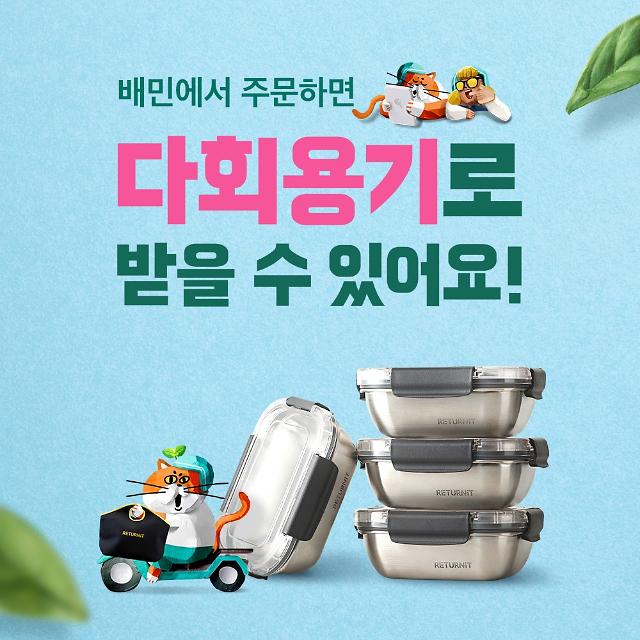 SEOUL -- South Korea's top food delivery service Baedal Minjok will test-use reusable food containers in Gangnam District, Seoul's heart of finance and fashion, as part of the capital city's project to reduce the use of disposable containers. Seoul said about 54 million disposable containers were used for delivery per month in 2021.

Data released by the Korea Consumer Agency on February 2022 showed that an average consumer who often eats delivered food generates about 11 kilograms (24 pounds) of plastic waste every year. Only about 45 percent of disposable plastic containers were recyclable. Food delivery services have gained popularity amid a coronavirus pandemic.

Through a four-month pilot project involving some 100 popular restaurants in Gangnam in October 2021, Soeul found that the rate of consumers choosing reusable dishes over disposable containers has increased by 30 percent every week. Seoul teamed up with popular delivery service operators including Baedal Minjok, Yogiyo, and Coupang Eats.

Baedal Minjok said in a statement that its pilot service started in Gangnam on August 29. Users can choose restaurants that use reusable containers for delivery through the company's app. Itgreen, a company specializing in cleaning and resupplying food containers, will provide reusable containers to restaurants and resupply them after collecting and cleaning. Consumers are not required to pay additional costs for Itgreen's service.

"This service will attract customers who find it hard to get rid of leftovers after eating delivered food. Customers can leave leftover food in reusable containers and deliverymen will take care of it," Seoul official Kim Jae-kwon told Aju Business Daily.