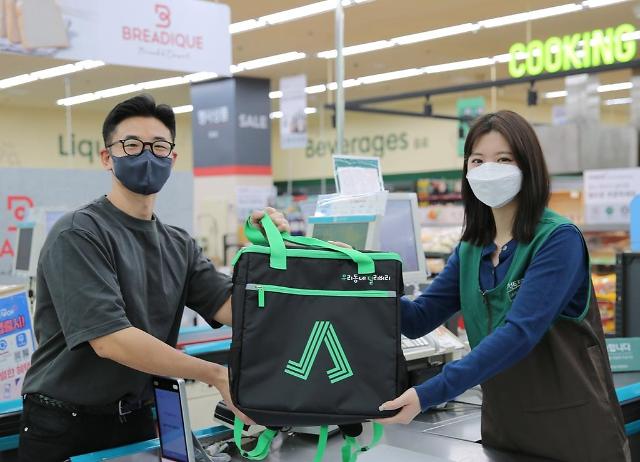 SEOUL -- GS25, a South Korean convenience store franchise, has reduced carbon dioxide emissions by about 522 tons since the company rolled out an on-foot delivery service two years ago. Anyone aged more than 18 years old can participate as deliverymen to carry small-sized packages including groceries to homes within a radius of 1.5 kilometers (0.9 miles) from a store for a fee of up to 3,200 won ($2.38).

According to data released by the national statistical office, online transactions of food and grocery products reached 2.2 trillion won ($1.6 billion) in December 2021, up 11.2 percent from a year ago. Amid a coronavirus pandemic, many people preferred eating delivered food over going out to crowded restaurants. Most delivery workers have used motorcycles to make multiple deliveries on a single run, which takes about an hour.

To shorten the delivery time and reduce the emission of CO2, GS25 launched the on-foot grocery delivery service called "Wooridongnae Delivery" (My Town Delivery) in August 2020. Using the company's app, anyone can receive groceries, cosmetics and daily necessities from on-foot deliverymen. The franchise operated 15,453 stores nationwide as of 2021. The number of on-foot delivery men rapidly increased to some 80,000 in 2022, up 50 percent from a year ago.

GS Retail, the operator of GS25, said in a statement that about 522 tons of CO2 were reduced considering that the on-foot delivery workers' total walking distance reached about 3.6 million kilometers. GS Retail said it has the same effect as planting 489,000 trees. Among some 80,000 on-foot delivery workers, men accounted for 63.1 percent. Those in their 40s accounted for 36.4 percent, followed by 30s with 34.7 percent and 50s with 16.4 percent. Young people in their 20s accounted for 12.5 percent.

Most deliveries were made by male workers in their 50s with about 12,000 deliveries. The service was mainly used during the lunch break between 11 a.m. and 12 p.m. and dinner time between 6 p.m. and 7 p.m.

"We will continue to push for delivery partnerships with external companies so that more on-foot delivery workers can carry out environmentally-friendly delivery tasks," GS Retail official Go Rang-hoon said in a statement on August 29. GS Retail has expanded its on-foot delivery service to various restaurants including Mom's Touch, a mid-tier fried chicken and hamburger chain and Genesis BBQ, the operator of the popular fried chicken franchise BBQ.