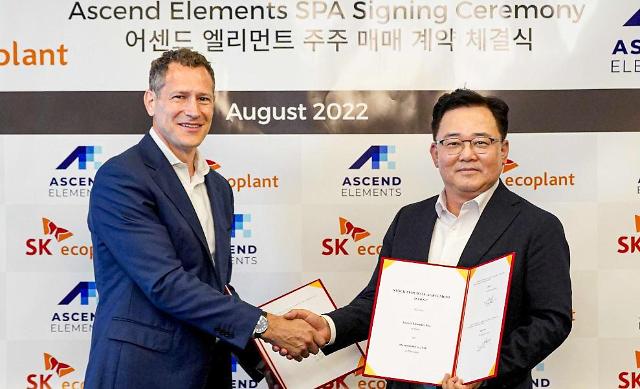 
SEOUL -- SK ecoplant, an environmental and energy solution provider affiliated with South Korea's SK Group, has strengthened its presence in the recycling of discarded electrical or electronic devices such as waste electric vehicle batteries by becoming the largest shareholder of Ascend Elements, an innovative U.S. waste battery recycling company.

SK ecoplant said its investment is to preoccupy the rapidly growing waste battery recycling market by establishing a value chain. "We will dominate the global market by securing innovative technologies and supplies, which are two key points of the waste battery industry," CEO Park Kyung-il said in a statement on September 1.

The investment came after Ascend Elements announced plans to invest up to $1.0 billion in a factory for the production of sustainable battery materials for electric vehicles in southwestern Kentucky. Production is scheduled to start at the end of 2023, using "hydro-to-cathode" technology, which processes black mass from recycled batteries directly into new cathode materials.

Once a battery reaches the end of its useful life, the battery pack can be collected, dismantled, and shredded to produce black mass, which consists of high amounts of lithium, manganese, cobalt, and nickel metals. Critical materials can be extracted from the black mass and reused in new battery production.