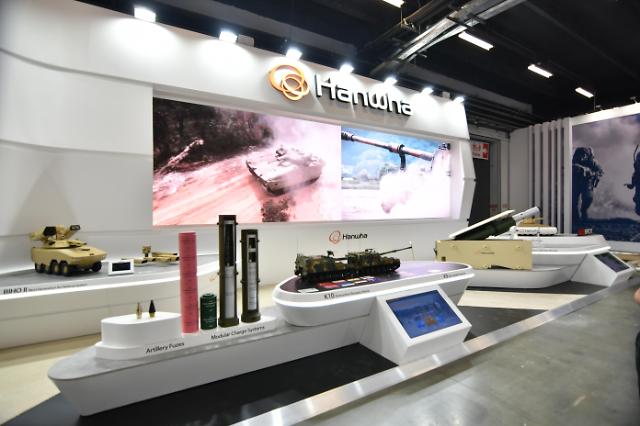 SEOUL -- Hanwha Defense, a major defense company affiliated with South Korea's Hanwha Group, will open an earnest discussion with Poland's state defense group on the potential joint development of a multiple rocket system and a new infantry fighting vehicle on the sidelines of an arms trade fair in the European country that borders Ukraine.

Poland has been interested in introducing Hanwha's next-generation infantry fighting vehicle called "Redback,", which is one of the two final candidates for an Australian military project to replace old armored personnel carriers.

At the MSPO International Defence and Security Technology fair that took place in Kielce from September 6 to 9, Hanwha Defense will advertise the Redback along with the package solution of its K9 self-propelled howitzer and other weapons. Hanwha Defense hopes to promote the Redback as a second-hit product after K9 Thunder, a popular self-propelled howitzer.

Hanwha Defense said that the fair would provide an opportunity for Hanwha Defense to have a sincere conversation with Polska Grupa Zbrojeniowa (PGZ) SA, a state defense group in Poland, on the development of a next-generation infantry fighting vehicle based on the Redback and a multiple rocket launch system, as well as cooperation for a follow-up implementation contract on K9 Thunder.

"The MSPO 2022 will be the venue for us to show and prove our determination and capability to cooperate with the Polish Government and local industry by presenting a wide range of advanced defense solutions meeting the requirements of the Polish Armed Forces," Hanwha Defense's overseas business division head Lee Boo-hwan said in a statement on September 6.

Poland has signed basic deals with South Korea to acquire 48 FA-50 light attack fighters, more than 900 K2 battle tanks and K9s, saying it has been striving to "fill the gap" created by the delivery of weapons systems to Ukraine. Hanwha Defense signed the first phase of "Executive Contract" with Poland on August 26 to deliver a package of K9 artillery systems and ammunition between 2022 and 2026.

By the end of 2022, Hanwha Defense would establish a Polish branch and use it as a forward base in Europe to expand exports of various weapons systems. "Poland will be a hub base for Hanwha’s global expansion, especially in Europe. To that end, we are dedicated to working together with the Government of Poland with full partnership and trust," said Hanwha Defense CEO Son Jae-il.

Egypt inked a $1.7 billion contract in February 2022 to introduce K9A1, the upgraded version of K9, and support vehicles, becoming the eighth foreign country to adopt the artillery system after Turkey, India, Poland, Norway, Finland, Estonia and Australia. Hanwha Defense has created an industrial partnership with local defense companies in Britain to supply K9A2, the most advanced version of K9.