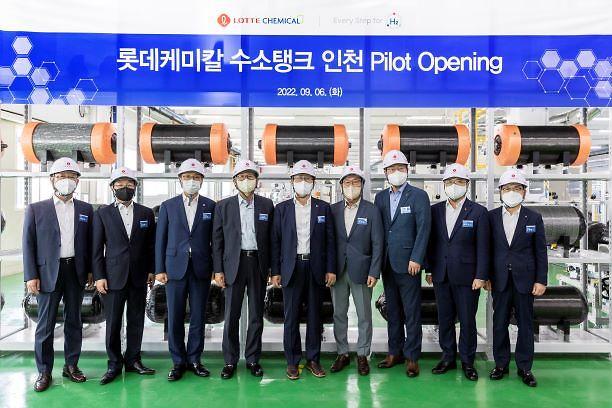 
SEOUL -- Lotte Chemical, a major chemical company based in South Korea, has completed a pilot plant for the production of hydrogen tanks for fuel cell electric vehicles. It is designed to produce up to 15,000 50-liter hydrogen tanks annually.

Lotte Chemical said it would develop various capacity hydrogen tanks and apply them to commercial vehicles and drones. "Hydrogen tank technology plays an important role in storing and utilizing hydrogen with the growth of hydrogen mobility and will bring us new opportunities at the beginning of an eco-friendly hydrogen economy," Lotte's vice-chairman Kim Gyo-hyun in charge of chemical businesses said in a statement on September 7.

The pilot facility built on the site of Lotte Aluminium's plant in the western port city of Incheon applied a high-speed filament "dry-winding" method which is more efficient for mass production. Filament winding is mainly used for manufacturing cylinders or tanks. In wet winding, fibers are unwound from roving and passed through a bath of resin mixture before it is wound on a mandrel of defined orientation. The dry method uses fibers in their pre-impregnated form.

Hydrogen is stored inside a pressurized tank that requires safety and reliability at ultra-high pressures because it is extremely flammable when mixed with very small amounts of air. Because of the dangers of explosions, many people feel uncomfortable about hydrogen fuel stations in urban residential areas. Fuel cell electric vehicles are considered the next-generation zero-emission clean energy vehicles, but the lack of accessibility to charging stations has hampered their popularization in South Korea.