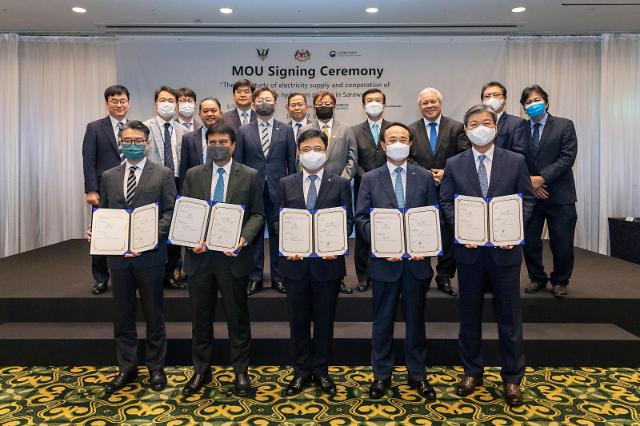 SEOUL -- South Korean companies, including Samsung Engineering, and their Malaysian partners agreed to study the potential of supplying at least 900 megawatts of hydro-based renewable power for Malaysia's H2biscus energy project in Sarawak, a state located in northwest Borneo Island.

Samsung Engineering, a construction and project management company in South Korea, said it has signed a memorandum of understanding with SEDC Energy, a subsidiary of Malaysia's Sarawak Economic Development Company (SEDC), and Sarawak Energy Berhad, an electric utility, as well as Lotte Chemical and POSCO Holdings. SEDC Energy aims to make Sarawak a hub for the ASEAN hydrogen energy market.

The five companies will jointly study the supply capacity of power in the H2biscus project to produce some 200,000 tons of clean hydrogen and facilities such as substations and transmission infrastructure. Commercial product is to begin by the end of 2027. Blue and green ammonia and blue methanol will be imported to South Korea, while green hydrogen will be used locally in Sarawak.

Samsung Engineering said that the H2biscus project is expected to greatly contribute to the achievement of South Korea's carbon neutrality goal. "We expect that the signing of this MoU for renewable power supply will be an important milestone in the Sarawak H2biscus project, and we are confident that we will provide a successful project through our existing robust local network," Samsung Engineering's chief financial officer Cheong Ju-seong said in a statement on September 8.

Together with state research groups and universities, Samsung Engineering and Lotte Chemical are involved in a government project to acquire core technologies through the demonstration of an ammonia-based green hydrogen production pilot plant.