Guzzi allowed to go ahead with rare fashion event at S. Korea's royal palace in November 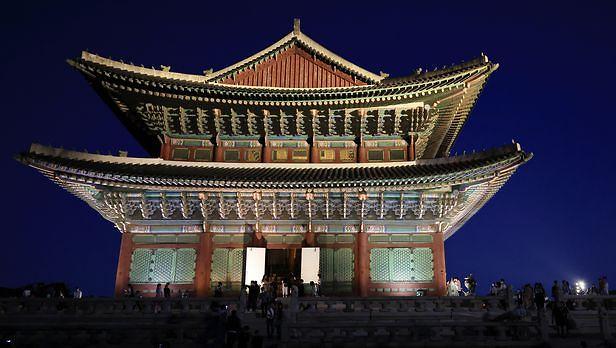 SEOUL -- Gucci, a high-end luxury fashion house in Italy, will not miss a rare opportunity to hold a fashion show at South Korea's tradition royal palace with the consent of a hesitant government agency charged with preserving cultural heritages and escaped falling victim to a public uproar triggered by Vogue Korea's photo shoot.

The green light came from the Cultural Heritage Administration (CHA), which has scratched its head over whether to approve Gucci's Cosmogonie fashion show on November 1 at Geunjeongjeon, the main hall of the Gyeongbokgung royal palace of the Joseon dynasty that ruled the Korean peninsula from 1392 to 1897.

Initially, Gucci had obtained conditional approval to bring Italian fashion designer Alessandro Michele's new collection to the palace symbolizing the dignity of royal families, especially among the preservers of traditional values. The Cosmogonie fashion show inspired by constellations was first unveiled at Italy's Castel del Monte, a 13th-century castle listed as UNESCO's world heritage, in May.

The fashion show could have been canceled due to a public uproar that erupted in late August after the South Koran branch of Vogue, an American monthly fashion and lifestyle magazine, released pictures showing models who were captured posing on chairs, pillars and stairways at the former presidential compound of Cheong Wa Dae (Blue House).

CHA came under fire because some pictures showed models taking sensual postures in flamboyant dresses. At a parliamentary session, CHA head Choi Eung-chon voiced regrets and vowed to prevent the recurrence of similar incidents. For decades, the Blue House had been used by former presidents as their office and residence until President Yoon Suk-yeol relocated the presidential office to a defense ministry building in May 2022 to keep his election pledge.

It is rare to host fashion events at government-owned properties used to oversee political affairs in South Korea where unique Confucian features from the Joseon dynasty still remain. Traditionally, exposing skin inside palaces was considered inappropriate because the dignity of rulers should be kept in such royal places.

The Blue House has become a hot tourist destination in central Seoul with the cumulative number of visitors reaching 1.57 million as of August 19.

For its fashion show at Geunjeongjeon, which was used to greet foreign envoys and hold national ceremonies, Gucci has tried to invite hundreds of people, including diplomats and celebrities. The cultural heritage committee allowed the event under the conditions of taking advice from related experts to strengthen the value of Gyeongbokgung Palace as historical and cultural heritage and clearly ascertain historical facts.