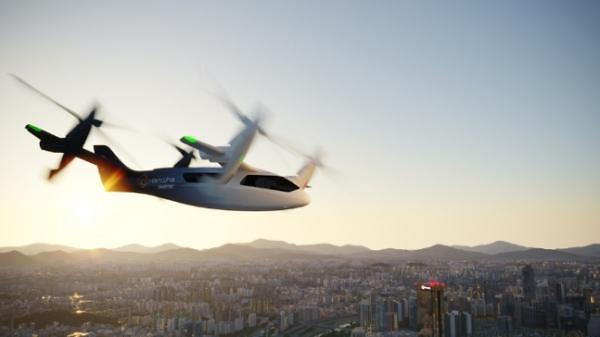 SEOUL -- A consortium involving SK Telecom and Hanwha Systems aims to launch a pilot service for urban air mobility in 2025 on South Korea's main resort island of Jeju by linking its airport and tourist attractions. As a leading tourist destination, the island was seen as an ideal test bed for air taxis due to its good airport facilities and well-maintained traffic infrastructure.

SK Telecom said its consortium signed a business agreement with the provincial government of Jeju to establish a UAM vertiport and a traffic management system for a pilot service linking the island's international airport and major tourist attractions. The goal is to build a foundation for actually operating UAM in a complex urban environment.

Because Jeju is South Korea's largest tourist destination and has good airport facilities and infrastructure, it will be easy to secure public acceptance, SK Telecom said, describing Jeju as a good place to quickly commercialize a UAM service.

For a pilot service in Jeju, SK Telecom (SKT) is in charge of a communication system and a mobility platform. "We will nurture Jeju, an eco-friendly tourist attraction, as a base for UAM innovation and develop it as a game changer for future mobility services," SK Telecom CEO Ryu Young-sang said in a statement on September 14.

KAC, which operates and manages airports, provides a UAM traffic management service. "The Jeju Island pilot project is will be an opportunity for South Korea to become a global leader in the UAM industry," KAC CEO Yoon Hyeogn-jung was quoted as saying. Jeju will provide a UAM operation site and creates a UAM ecosystem and administrative support.

Hanwha Systems is responsible for UAM aircraft manufacturing, operation, and maintenance while developing navigation and control solutions. "The K-UAM dream team consortium will do its best to lower psychological hurdles for new transportation in Jeju, where tourism and cultural resources are concentrated, and lead the future mobility paradigm," said Hanwha Systems CEO Eoh Sung-chul.

Along with Overair, an American maker of electric vertical takeoff and landing (eVTOL) vehicles, Hanwha Systems aims to produce an air taxi called "Butterfly" that can fly at a maxim speed of 320 km per hour.

As a top mobile carrier in South Korea, SK Telecom is involved in the development of a mobile communication network for air taxis. The company has tested stable communication quality at the altitude of UAM operation from 300 to 600 meters by using a quality measurement drone in a flight test center in the southern seaside county of Goheung.

The government has worked out a "K-UAM Grand Challenge" program to demonstrate the safety of air taxis and test traffic management functions. Air taxis will fly through corridors, or known as virtual channels in low-altitude airspaces, to prevent accidents and improve the safety of pedestrians on the land. SKT will build a pilot 5G sky network infrastructure near Seoul through collaboration with its American partner, Joby Aviation.