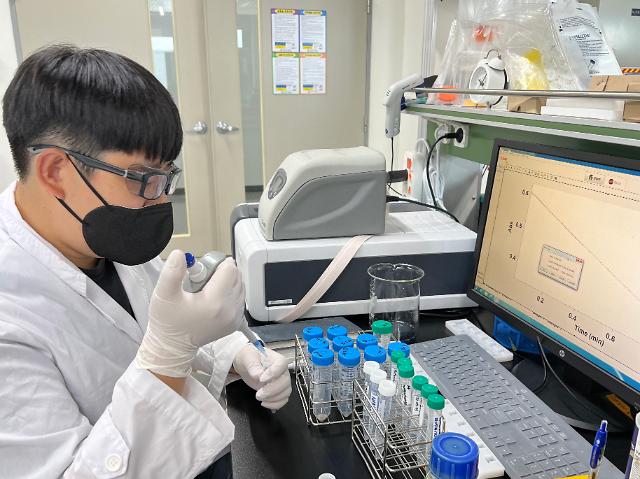 [Courtesy of the Korea Institute of Energy Research ]


SEOUL -- South Korean researchers have discovered a new enzyme that can produce formic acid, a hydrogen storage substance, from carbon dioxide. They described the new method as the core of high-value-added material production through the recycling of carbon dioxide into resources.

Formic acid is an important intermediate in chemical synthesis and occurs naturally, most notably in some ants. Industrially, formic acid is produced from methanol. A major use of formic acid is as a preservative and antibacterial agent in livestock feed. It has been considered a means of hydrogen storage. It is possible to use formic acid as an intermediary to produce isobutanol from carbon dioxide using microbes.

The state-run Korea Institute of Energy Research (KIER) said that its research team has discovered a new reducing enzyme that stores carbon dioxide as formic acid through genetic mining based on a genetic database and developed a source technology to produce hydrogen storage materials from greenhouse gases.

The team led by Min Kyung-sun, a senior KIER researcher, has established an enzyme reaction system for the production of formic acid by analyzing carbon dioxide reduction activity and reaction characteristics with discovered enzymes.

"Genetic and structural information is a very important technology to find an activity that has been difficult to find in nature," Min said in a statement on September 15. "Research on the development of enzyme-based biological processes that can directly utilize carbon oxide to convert it into energy storage materials can greatly contribute to the realization of carbon neutrality."

Three newly discovered carbon dioxide-reducing enzymes can be mass-produced through a recombinant protein expression system, the institute said, adding that it is an eco-friendly and low-energy process because reaction temperatures and energy requirements are low compared to the existing electrochemical catalyst conversion technology. It also has the advantage of being able to produce 100 percent antacid without by-products.