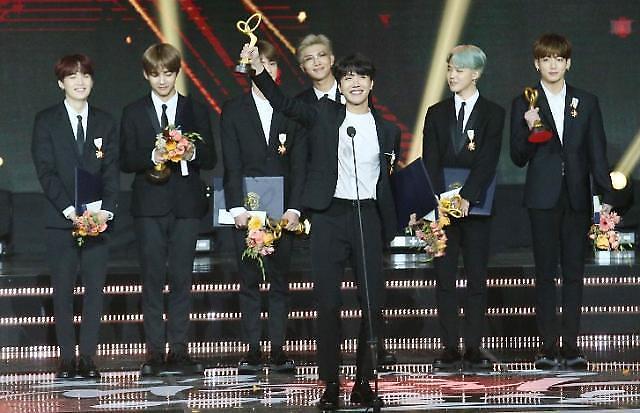 SEOUL -- BTS members fall into an awkward situation whenever a social debate erupts over their military service. It has been an extremely sensitive social issue with military officials reluctant to give them special treatment for fear of a backlash from young men in the run-up to military duty in South Korea still technically at war with North Korea.

So far, discussions have focused on whether BTS members should be exempted from compulsory military service. In South Korea, all able-bodied males aged 18 to 28 should complete their military service for more than 18 months. Those who are not physically or mentally able enough to serve are assigned as public service workers at administrative facilities. Olympic medalists are given an exemption, but there are no rules governing pop artists.

In a new survey of 3,004 adults, conducted by pollster Innertech Systems, 59.8 percent supported BTS' alternative non-military service, which is a form of obligatory service performed in state-owned institutions or facilities instead of military camps. Some 38.8 percent gave negative answers. The negative response was notable among those aged 18 and 29.

The approval rate was higher among women with 62.3 percent than men with 57.3 percent. Among positive answers, those in their 60s and older accounted for 68.5 percent, followed by those in their 50s with 66.9 percent and 40s with 63.4 percent. The margin of error was 1.8 percent.

The survey found that 88.1 percent acknowledged BTS' contribution to the promotion of national prestige and cultural development. In December 2020, BTS members were rewarded with the postponement of conscription for military service. BTS' eldest member Jin, who was 28 at the time, was allowed to put off enlistment until the age of 30. The deadline is the end of 2022.

Many celebrities lost their reputation for evading military service. Steve Yoo, a Korean-born American singer, had gained popularity for his sporty image and explosive dancing style until he acquired U.S. citizenship in 2002. He has been banned from entering South Korea for widespread criticism that he changed nationality to evade military conscription.