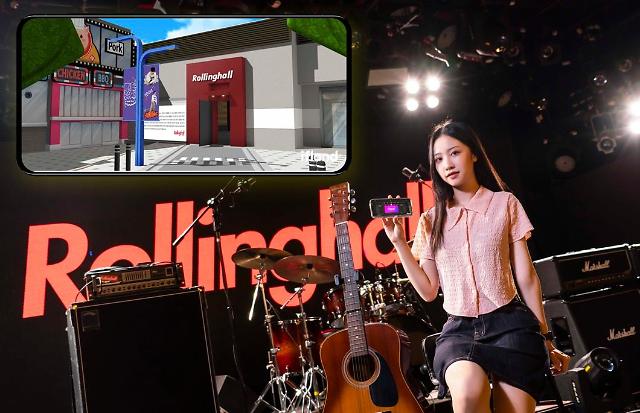 
SEOUL -- SK Telecom, a top mobile carrier, has created a concert hall for indie music at its metaverse platform, Ifland, to showcase the performances of various indie bands and musicians, using volumetric capture technology that uses many cameras to capture an entire scene in 360 degrees in volumetric 3D for the production of high-end holographic virtual reality and augmented reality content.

In Ifland, SK Telecom (SKT) recreated Rollinghall, a live hall that has represented indie music for decades, to hold a six-day concert from September 19. "Metaverse space will provide new artists with opportunities to perform and show musical diversity," SKT's metaverse business head Yang Maeng-seok said in a statement on September 19.

The metaverse is a collective virtual shared space, created by the convergence of virtually enhanced physical reality and physically persistent virtual space. It describes a future internet of persistent, shared, 3D virtual spaces linked into a perceived virtual universe. SKT has tried to boost the popularization of its Ifland metaverse platform by running special programs and holding large-scale events.

For its global launch, SKT has already developed the English version of Ifland, which maximizes user experience through diverse virtual spaces and avatars. Based on the popularity of K-pop and Hallyu (Korean cultural wave), SKT hopes that metaverse performances and fan meetings capable of overcoming geographical limitations will attract great attention from global fans.

SKT claimed to have received more than 2,000 love calls for partnerships from companies and organizations. The company predicts an "explosive" increase in the number of creators and influencers if various economic activities are available in the metaverse world.

SKT has promised to introduce economic systems sequentially, such as points that can be used like cash, functions that can send sponsorships to those hosting metaverse meetings, and an open 3D content platform that can make profits by selling costumes and items designed and produced by users themselves.