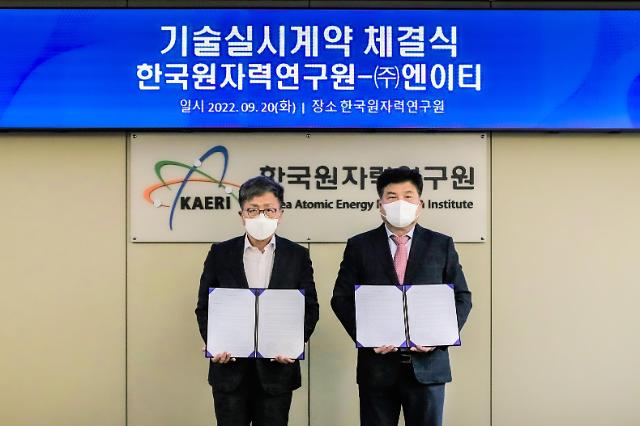 SEOUL -- South Korea's state nuclear energy research body has developed a technology that can reduce the volume of uranium waste by up to 90 percent and safely dispose of it. For commercialization, researchers have transferred their technology to a private company specializing in radioactive waste treatment and disposal.

The Korea Atomic Energy Research Institute (KAERI) said its research team left contaminated nuclides behind to easily separate non-radioactive substances from radioactive waste. "We hope that the new technology will contribute to solving the problem of radioactive waste in our society through technology transfer," Lee Keun-young, a senior KAERI researcher, said in a statement on September 21.

The traditional acid cleaning method cannot treat radioactive waste below the concentration that can be disposed of by itself and exposed difficulties in reducing the volume of waste. Lee's team has developed a technology to reduce the volume of uranium waste by separating non-radioactive materials from uranium waste.

KAERI said that the uranium waste solid was made into a solution, with non-radioactive materials selectively precipitated and separated into general waste. By incorporating sintering technology, researchers made uranium stable so that it does not react with other materials, and reduced volume by 50 percent. Sintering is the process of forming a solid mass of material through heat and pressure without melting to the point of liquefaction.

With KAERI's technology, a private company will commercialize uranium waste treatment technology and enter projects to dismantle nuclear power plants. KAERI and other research bodies have tried hard to develop nuclear waste disposal technologies. There have been growing concerns about nuclear waste and the management of spent fuel at 24 nuclear power plants in South Korea due to a U.S. ban on the development of reprocessing facilities.

Spent fuel rods are first kept in storage pools of water, which provide cooling and shielding against radiation. After 7 to 10 years in wet storage, they can be transferred to storage. South Korea has no intermediate storage or permanent disposal facilities. Used nuclear fuel has been kept in interim storage facilities. Korea Hydro & Nuclear Power (KHNP), the state-run operator of nuclear power plants, has called for a quick solution, saying storage facilities would have no more space to store nuclear waste.