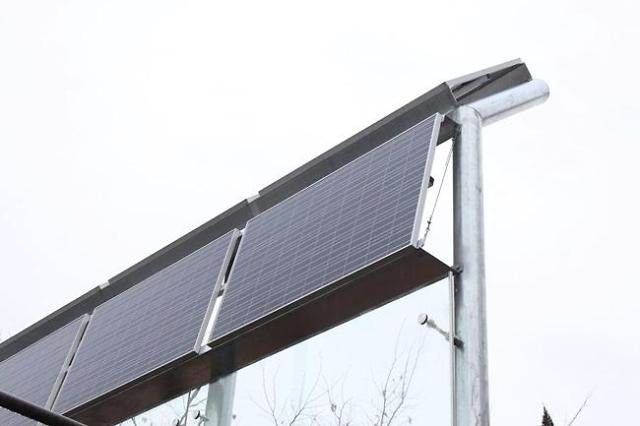 SEOUL -- Traditional solar panels are set up horizontally at an optimal angle to maximize their exposure to light. Researchers are in the race to develop new clean energy-generating devices such as a window-type system, bifacial solar panels, and transparent modules that can be applied to windows and soundproof walls.

Vertical solar panels can be used in a wide range of applications because they take up less space than traditional solar panels. Hanwha Q Cells, the solar cell-making wing of South Korea's Hanwha Group, will develop a technology that can block noise and generate solar power by manufacturing high-power, high-durability vertical solar modules for soundproof walls applied widely to South Korean roads and railways.

The two companies think their cooperation is meaningful in that they can expand solar power generation and minimize environmental damage by utilizing idle sites such as roads and railroads.

"Solar power plants in idle sites that can efficiently utilize national territory and are highly receptive is a very effective way to realize the transition to renewable energy and reduce carbon emissions," Kim Eun-sik, head of Hanwha Q Cells' Asia manufacturing division, said in a statement. "We will take the lead in expanding the supply of renewable energy."

Solar power facilities created by overturning ecologically sensitive sites and farmland have been a factor that hinders the social acceptance of renewable energy. According to the Korea Energy Agency, a state body in charge of energy policies, idle areas along highways, railways, abandoned roads and soundproof tunnels have a solar power generation potential of about 975 megawatts, which can be used by 1.38 million people for home electricity per year.

In South Korea, transparent soundproof screens using clear acrylic glass have been favored. Environment Ministry data showed that the length of soundproof walls installed nationwide stood at more than 1,700 kilometers (1,056 miles) with those installed on highways accounting for more than 60 percent, causing concerns about bird deaths due to collisions.

[Courtesy of the Ministry of Environment]

Government bodies have pushed for various measures to protect birds from crashing into transparent windows and soundproof road screens by asking contractors to apply anti-collision tapes, tiny dots, or uniformly spaced patterns that birds can recognize. Environmental groups and wildlife activists suggest that solar panels attached to transparent windows or soundproof walls can be an option to prevent bird deaths.

Researchers have demonstrated methods to grow rice and ensure the free movement of agricultural machines under solar panels. A consortium involving Hanwha Q Cells is involved in a state project to develop a solar power system that would be used to grow crops and generate electricity simultaneously without losses in crop yields and energy production. Hanwha Q Cells will develop solar modules that would generate solar energy about 3.5 meters above farmland.

"Solar power generation is an important source of power in energy conversion, and it is very important to develop various photovoltaic technologies that do not damage the environment," EWP CEO Kim Yung-moon said, pledging active cooperation with industry, academia, and research institutes to develop and commercialize advanced eco-friendly solar energy technologies.

To secure a technological advantage over overseas competitors, especially in China, South Korea is actively pushing for the commercialization of new solar cell modules. A consortium led by Hanwha Q Cells is involved in the development of perovskite crystalline silicon cells by using tandem cell technology that builds perovskite on top of silicon solar cells.