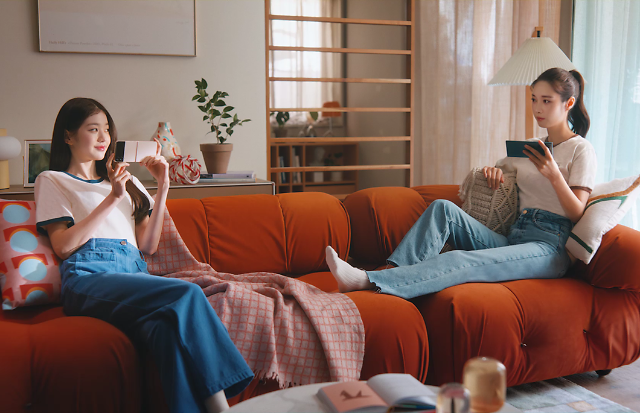 SEOUL -- Sua, a digital human capable of real-time interaction, will appear in advertisements for SK Telecom's artificial intelligence service "A." Unlike other virtual human-based advertisements that relied on voice actors' dubbing, Sua can deliver messages using its own voice created through AI-based voice synthesis technology.

SK Telecom (SKT), a top mobile carrier in South Korea, said that Sua was selected as a model to deliver the main functions of "A. tv," which recommends channels based on the viewing history and preferences of users, as a friend of Jang Won-young, the vocalist of K-pop girl band IVE. Viewers can consume various content including films, sports and TV series. Favorable content can be downloaded using smartphones.

Among some 1,300 TV advertisements released by SKT, this is the first time that a virtual human has been adopted as an advertising model. The company said that an actual human model and a virtual human appeared at the same time to highlight the AI elements of A. tv. Jang is the winner of Produce 48, a survival reality television show. She is also working as a host for a famous music show called "Music Bank."

Sua with some 182,000 followers on TikTok has garnered attention due to its realistic and natural look. The digital celebrity was created by On Mind, a 3D virtual human development wing of Neptune, a mobile game and software company affiliated with South Korea's web service company Kakao. In June 2021, On Mind partnered with AMD, an innovative American technology company, to enable Sua to have more realistic and natural hair with hair and fur rendering and simulation technology.