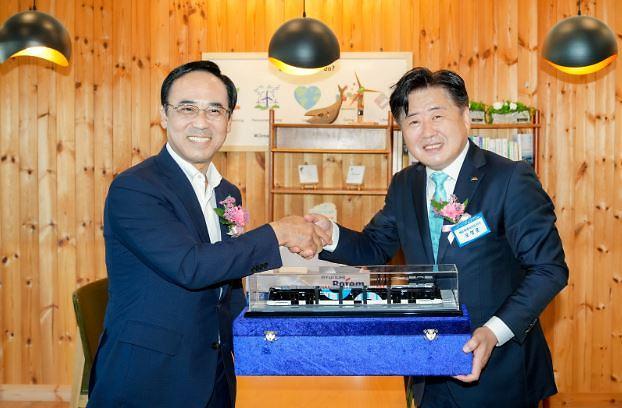 Hyundai Rotem gave an explanation of the technology and development status of hydrogen electric trams at a green hydrogen forum on the southern resort island of Jeju to build a hub for green hydrogen. By March 2026, Jeju will spend about 62.3 billion won ($43.5 million) to produce 2.7 tons of green hydrogen every day through water electrolysis that uses electricity to decompose water into oxygen and hydrogen gas. Green hydrogen does not use any fossil fuel during its manufacturing process.

"As the demand for eco-friendly hydrogen mobility increases, there is an increasing need to expand infrastructure related to green hydrogen production technology," an unnamed Hyundai Rotem official said in a statement on September 30. "We will make efforts and contribute to innovating a sustainable transportation network."

Hyundai Rotem has been selected for a state project to develop hydrogen trams by the end of 2023 by modifying fuel cells for automobiles. The company would use idle tracks in the southeastern port city of Ulsan to verify optimal driving patterns such as fuel efficiency while driving more than 2,500 kilometers (1,553 miles) cumulatively.

The state-run Korea Railroad Research Institute (KRRI) has embarked on the development of locomotives based on liquefied hydrogen that can operate at a maximum speed of 150 km per hour and cover at least 1,000km on a single charge. The advantage of liquefied hydrogen is its high density compared to compressed gas, which means that more energy can be contained in a given volume for easy transportation. The institute hopes to put hydrogen locomotives into practical applications in 2025.