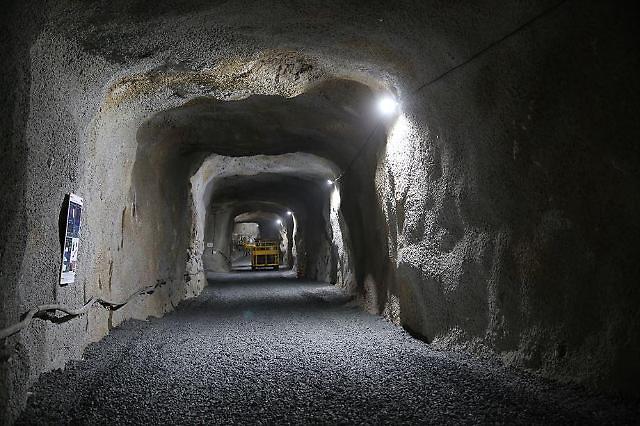 SEOUL -- South Korean researchers celebrated the completion of a new world-class astroparticle research facility located 1,000 meters underground in a remote mountain area for noise-free experiments to explain the origin and structure of the universe by detecting dark matter and neutrinos.

The state project to build Yemi Lab in a 989-meter-high mountain in Jeongseon, a county about 140 kilometers (87 miles) southeast of Seoul, cost some 30.85 billion won ($21.78 million) to build a 587-meter vertical shaft, a 782m horizontal access tunnel with a height of 15m or more, a research complex, and a three-story ground laboratory.

The sound-proof underground facility managed by the state-run Institute for Basic Science (IBS) covers about 3,000 square meters, the world's sixth-largest after Italy, the U.S., Canada, China and Japan, according to the Ministry of Science and ICT. The site located near a private iron mine was selected because the detection of natural radioactivity was significantly low, providing optimal conditions for various experiments.

Advanced air supply and temperature control devices provide an optimal residential environment and maintain 26 degrees Celsius. The main research complex has a dozen labs, a rest area, and an evacuation site located on both sides of a 1,000-meter-long straight tunnel that can accommodate up to 70 people. There is a mining toilet that can be managed without odor and pollutant emissions.

The walls are radiation-shieldable and painted with special shotcrete, or sprayed concrete, which is pneumatically projected at high velocity onto a surface. In the event of a fire or explosion, dozens of people can survive in a shelter for three days. In case of emergency, the tunnel can share an exit with a nearby iron mine.

"We hope that domestic and foreign researchers will conduct joint research at Yem Lab, the world's sixth-largest underground experiment facility, and develop it into a  global research space," First Vice Minister of Science and ICT Oh Tae-seok said in an opening ceremony on October 5. Joint research is to be conducted with overseas organizations.

Until now, researchers have carried out experiments in a facility, which is located 700m underground and covers an area of 300 square meters in Yangyang. They wanted a new facility with advanced equipment to create a world-class research environment because the lab in Yangyang reached its space limit. "We will contribute to the creation of results in various national science and technology fields by revitalizing the joint use of Yemi Lab," said IBS head Noh Do-young.

Laboratory equipment will be relocated to the new facility in Jeongseon from 2023. The new astroparticle research facility (ARF) was installed with detectors with ultra-low noise to reduce background cosmic rays to search for extremely rare events such as neutrinoless double beta decays and dark matter. The success of experiments relies on reducing background interference.

Scientists believe the universe consists of 26.8 percent dark matter and 68.3 percent ark energy. Signals from dark matter and neutrinos are very difficult to detect because they manifest into detectable particles via weak interaction. Given the very faint signals, sources of background noise must be reduced as much as possible.

Neutrinos are massive but their absolute masses and nature have not been determined. A measurement of neutrinos' masses requires highly sensitive equipment capable of detecting their extremely tiny signals.

In Yemi Lab, research will focus on AMoRE-II and COSINE-200. The AMoRE-II experiment investigates the physical properties of neutrinos by increasing the size of molybdenum crystals to 200kg. COSINE-200 is a study to explore traces of dark matter by observing the collision process between dark matter and sodium iodide crystals in the COSINE detector. Researchers can use a proton accelerator and a linear accelerator to conduct COSINE experiments.