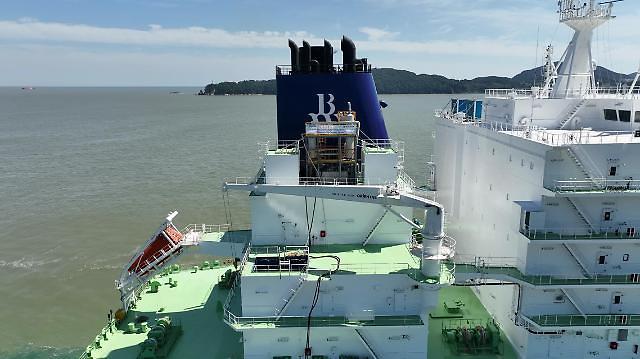 
SEOUL -- Daewoo Shipbuilding & Marine Engineering, a major shipbuilder in South Korea, has completed the performance verification of ship-based carbon dioxide capture and storage equipment by mounting it on an actual natural gas carrier.

Daewoo Shipbuilding & Marine Engineering (DSME) has teamed up with Gaslog, an LNG shipping service company in Greece, and the American Bureau of Shipping (ABS), a classification society based in the United States, to apply an onboard carbon capture and storage system (OCCS) to LNG carriers under construction.

OCCS dissolves some of carbon dioxide emitted by ship engines into an aqueous sodium hydroxide solution and converts it into a mineral form. Carbon dioxide absorbed in the form of minerals can be unloaded on land or discharged into the ocean after assessing a marine environmental impact. "Through actual ship verification, DSME has established itself as a leader in eco-friendly technology," DSME's technology center head Seo Jun-ryong said in a statement on October 5.

DSME was responsible for reviewing the basic design of OCCS equipment to share relevant technical data and drawings. Gaslog was in charge of technical requirements.  ABS provided guidelines on overall rules and regulations for OCCS development while overseeing evaluation procedures for obtaining approval in principle (AiP), which is a procedure to verify the technical suitability of a ship's basic design, leading to order activities.