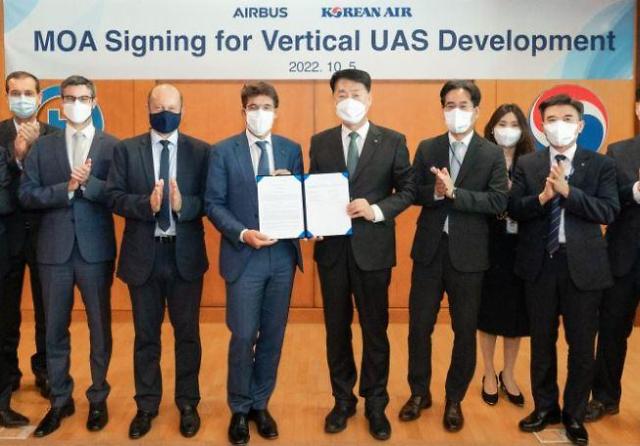 
SEOUL -- South Korea's top flag carrier Korean Air has partnered with the helicopter manufacturing division of Airbus to develop an unmanned surveillance military helicopter that can be used by warships to monitor operational areas or patrol frontline islands near the volatile inter-Korean maritime border in the Yellow Sea.

Because the 1950-53 Korean conflict ended with a ceasefire rather than a treaty, the two Koreas remain technically at war. The maritime border in the Yellow Sea has always been a flashpoint and was the scene of bloody naval clashes. In November 2010, North Korea shelled Yeonpyong, a frontline island, killing four South Koreans and triggering concerns of a full-scale conflict.

Under a memorandum of understanding, Korean Air (KAL) said on October 6 that technology acquired through its strategic partnership with Airbus Helicopters would be utilized to lead the unmanned helicopter market. Airbus Helicopters' VSR700 unmanned reconnaissance helicopter under development is designed to operate alongside other shipborne naval assets.

Korean Air has established a next-generation stealth drone development center. In August 2022, the company was selected by the Agency for Defense Development (ADD), a state defense technology development agency, as the preferred bidder for the development of a low-observable UAV squadron.

South Korea has tried to develop Kaori-X, a fighter-sized low-observable tailless drone that can be deployed independently or as a robot wingman to assist fighter planes. Unlike ordinary military UAVs in the shapes of miniaturized airplanes, tailless drones do not have tail wings -- a vertical stabilizer (fin) and horizontal stabilizers -- to minimize radar cross-section (RCS), the area exposed to radar waves, and give the airplane stealth abilities.

To meet future demands of warfare, ADD researchers are developing an unmanned compound combat rotorcraft (UCCR). Equipped with capabilities such as vertical take-off and landing, hovering, and high-speed flights, UCCR can fly faster and longer than conventional helicopters and effectively carry out reconnaissance and attack missions. Related technologies can be used for hybrid-electric propulsion aircraft that apply a turboshaft engine to advanced air mobility (AAM). AAM's potential applications could extend beyond high-density urban centers to reach underserved communities and geographically distant regions.