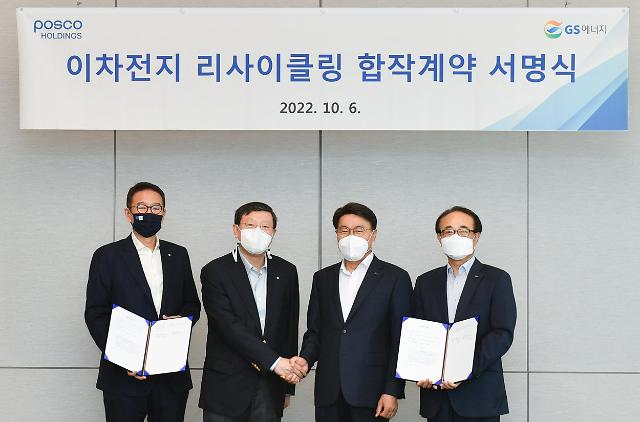 SEOUL -- South Korea's top steelmaker POSCO partnered with GS Energy, an energy arm of GS Group, to extract rare metals from waste electric vehicle batteries by establishing a joint venture by the end of 2022 with a total injection of about 170 billion won ($121 million). The deal came after POSCO completed the construction of a battery recycling plant in Poland.

POSCO Holdings will control 51 percent of the joint venture and the remainder to be held by GS Energy. "We hope that POSCO Group and GS Group will have a great synergy effect not only in securing stable waste batteries but also in establishing a new industrial ecosystem related to secondary battery recycling," POSCO Group chairman Choi Jeong-woo said in a statement on October 6.

Choi predicted that the battery recycling market would grow as the use of recycled raw materials will be mandatory from 2030 with Europe at the forefront. Battery makers are developing technologies to recycle battery packs for electric vehicles as lithium-ion battery-powered cars are just now coming to the mass market worldwide.

Once a battery reaches the end of its useful life, the battery pack can be collected, dismantled, and shredded to produce black mass, which consists of high amounts of lithium, manganese, cobalt, and nickel metals. Critical materials can be extracted from the black mass and reused in new battery production.

"I'm confident that if we gather the business capabilities of the two groups, we will be able to respond to the industrial and social demands of energy transformation and create new business opportunities," GS Group chairman Huh Tae-soo was quoted as saying.

In August, POSCO Holdings completed the construction of a battery recycling plant in Poland that will produce scrap materials, also known as black mass, by pulverizing discarded batteries and scraps collected in Europe. The black mass will be supplied to  POSCO HY Clean Metal, a joint venture between POSCO and its Chinese partner Zhejiang Huayou Cobalt.

Secondary batteries, also known as rechargeable batteries including lithium-ion batteries, have become a key industry that would shape the future of renewable energy. Discarded large-capacity lithium-ion batteries can be broken down to create the black mass that has a very high sustainable value thanks to high contents of lithium, manganese, cobalt and nickel metals that can be extracted for use again in the production of new batteries.