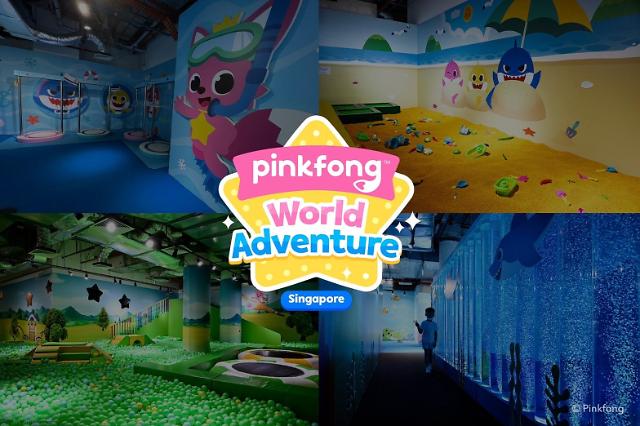 SEOUL -- In an effort to expand its overseas business, the creator of a catchy cartoon song called "Baby Shark" stepped up efforts to bring global fans to an offline pop-up theme park that provides various experiences such as 3D realistic content, character sculptures, amusement and photographing. The first pop-up theme park opened in Singapore on October 7.

Starting with Singapore, the pop-up park called "Pinkfong World Adventure" will go to Malaysia from January to April 2023, Hong Kong from June through August, and other countries sequentially, according to the Pinkfong Company, an educational entertainment company in South Korea. The company will run the theme park in Malaysia and Hong Kong in almost the same size and concept as Singapore's, but there may be changes to reflect regional features.

"Launching 'Pinkfong World Adventure' is a great opportunity for us to engage with fans and expand our representation across Asia," Pinkfong's chief business officer Gemma Joo said in a statement. "We'll continue to seek unique, creative ways to bring the fun of our beloved shows and characters to the daily lives of kids and families."

The first offline theme park run for three months until January 2, 2023, at Singapore's giant shopping mall, Marina Square, which is the size of seven tennis courts. The fun-filled, creative adventure event in Singapore comprises four attraction zones with more than 16 interactive games and entertainment experiences inspired by Pinkfong and Baby Shark. Kids and families can explore different worlds from their favorite Pinkfong and Baby Shark shows.

Baby Shark depicts a story about a family of great white sharks with colorful visuals and a catchy melody. After the original version, uploaded in late 2015, made a phenomenal hit worldwide, Pinkfong has created a new wave of family entertainment, adapting Pinkfong and Baby Shark shows into TV animated series, a world live tour, and interactive games.

To produce content in various languages, Pinkfong is collaborating with various foreign voice actors. When translating original lyrics into other languages, Pinkfong's communications manager Yeon Hee-jae said that choosing the right words that fit each culture has been quite challenging.