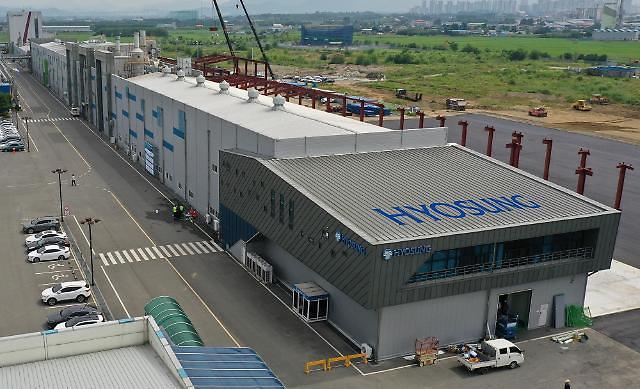 Hyosung, which is the first South Korean company to produce carbon fiber products, said its new H3065 (T-1000)-class carbon fiber has a tensile strength of 6.4 gigapascals (GPa) and an elastic modulus of moe than 295 GPa. GPa is a unit that measures the strength of a material, and 1 GPa means the strength at which a 1mm-wide and 1mm-long material can withstand 100kg of weight.

With the development of H3065, Hyosung Advanced Materials said it will be able to enter the high-value-added space and aviation carbon fiber market. "This development has provided an opportunity for Korea to become an advanced country in carbon materials that can produce ultra-high-intensity carbon fibers after Japan and the United States," Hyosung Group chairman Cho Hyun-joon said in a statement on October 12.

The H3065 special carbon fiber, which is more than 14 times stronger than iron, can be used in aerospace and defense industries because it is light and has high elasticity and strength, capable of withstanding high loads and reducing the weight of projectile as much as possible. It can increase propulsion and the weight of the payload. Hyosung's previous H2550 (T-700)-class carbon fiber product has been largely used for hydrogen fuel tanks, wire cores, solar insulation, and sports.

South Korea has focused on acquiring original technologies since Japan restricted exports of key materials in 2019. A government roadmap unveiled in February 2021 specified a goal to become one of the world's top three players in carbon-based convergence industries by garnering a market share of 15 percent by 2030.