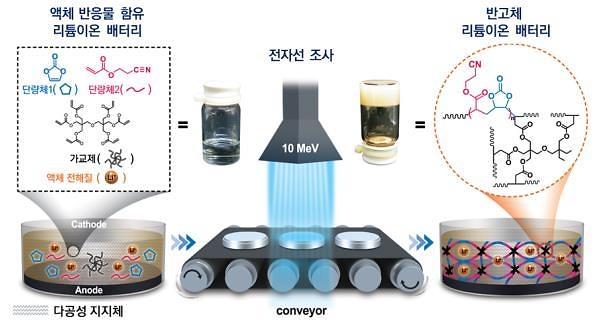 Electron beams cause chemical reactions at room temperature. Due to their high penetrating power, they can reach the inside of batteries. Using such characteristics, a research team led by Jung Chan-hee, a solid electrolyte researcher at the Korea Atomic Energy Research Institute (KAERI), developed an electron beam-sensitive reactant that changes liquid into a semi-solid form when irradiated with electron beams.

The developed reactant was created by combining two types of monomers -- vinylene carbonate and co-cyanoethyl acrylate -- with a cross-linking agent in a conventional liquid electrolyte. A liquid electron-sensitive reactant is filled in the space between cathodes, supporters, and anodes. When irradiated with 10 maximal extractable value (MeV) electron beams, the liquid reactant into a gel-like semi-solid electrolyte.

As a result of analyzing the cross-section and element distribution of semi-solid batteries, the same level of performance as that of liquid electrolyte batteries was confirmed. KAERI researchers secured additional safety as semi-solid electrolytes are evenly formed inside the battery, which has excellent performance and does not leak out in the form of a gel.

"This achievement is significant in that it proposed a new methodology capable of improving commercial performance and securing mass production by adding an electron beam irradiation process to the current battery manufacturing process," Jung said in a statement on October 13. KAERI said the technology is advantageous for commercialization because electron beam irradiation can be added within a few minutes to the conventional process of manufacturing lithium batteries.