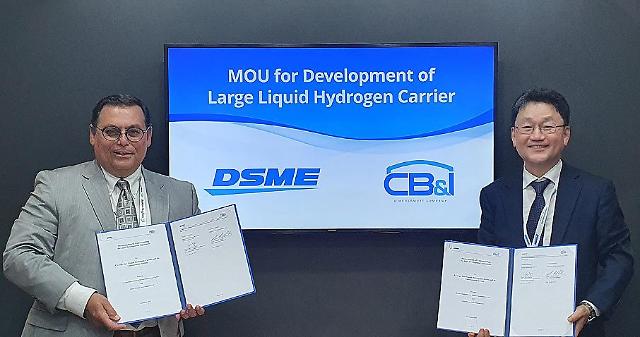 Daewoo Shipbuilding & Marine Engineering (DSME) said that the partnership with CB&I would contribute to realizing the large size of liquefied hydrogen carriers. "The combination of our shipbuilding technology and CB&I's storage tank technology will help the domestic shipbuilding industry maintain its world's top position in the field of large liquit hydrogen carriers," an unnamed DSME official said in a statement on October 13.

Liquid hydrogen is essential in a government campaign to expand the use of fuel cells. In January 2022, a prototype won preliminary approval from a domestic maritime classification society, based on design innovation and new cryogenic materials.

Amid growing demands for eco-friendly ships to cope with global economic recovery and environmental regulations, South Korea has accelerated the development of hydrogen-powered ships. A state-initiated project was launched in September 2021 to develop a maritime liquefied hydrogen fuel tank.

POSCO has developed a liquefied natural gas (LNG) storage tank using high manganese steel approved by the International Maritime Organisation (IMO), a U.N. maritime safety agency. The steel group works with the state-run Korea Institute of Machinery and Materials (KIMM), DSME, and Korea Gas Safety Corp. (KGS) to develop a liquid hydrogen storage tank using high manganese steel, which is an alternative material for cryogenic services because it is easier to weld and has lower manufacturing costs than stainless steel.