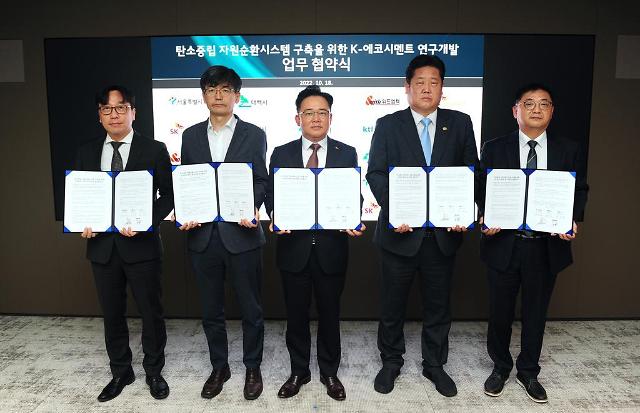 SEOUL -- Seoul has launched a project to produce eco-friendly cement using incineration ashes and sewage sludge as alternative materials. Through the commercialization of technologies, the capital city with a population of 9.5 million aims to produce 150,000 tons of cement annually with recycled materials.

Seoul will provide incineration ash and sewage sludge. Taebaek, a highland city in the mountainous province of Gangwon, will provide a site for research facilities. WithMTech, a construction material developer, will provide technical assistance. Product certification and performance testing will be carried out by the Korea Institute of Industrial Technology (KITECH).

Seoul thinks the project will contribute to reducing the amount of saturated waste landfill by expanding the recycling of incineration ash and sewage sludge. "We hope this research and development project will not only reduce the amount of waste landfill but also popularize the use of waste resources," Seoul's resource recovery facility promotion team head Yoon Jae-sam said in a statement on October 19.

SK ecoplant, a major waste management company, will supervise and lead the development of technologies. In July 2022, the company tied up with CMD Group, a domestic construction material supplier, to recycle waste incineration ash as construction materials that can replace cement and natural aggregates for the production of retaining wall blocks and sidewalk blocks.

Data from the state-run Korea Environment Corporation, cited by SK ecoplant, showed that South Korea's waste incineration facilities have treated about 9.12 million tons per year as of 2020. The amount of incineration ash stood at about 2.16 million tons. Incineration ash was difficult to recycle. Although it was recycled as bricks or sidewalk blocks, expansion or cracking significantly reduced the strength of aggregates using concrete mixed with incineration ash.