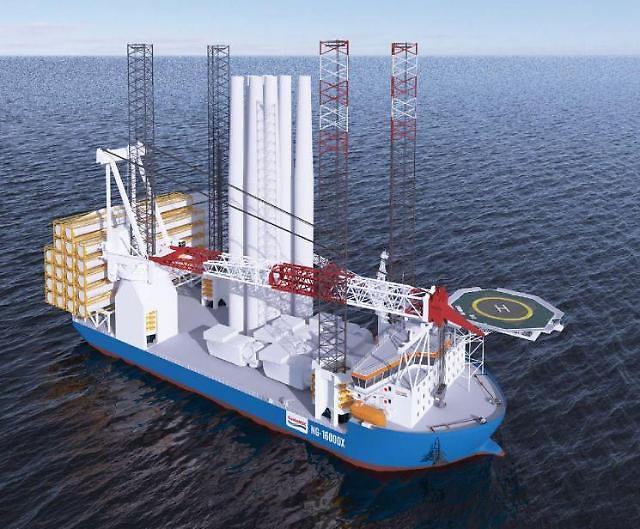 SEOUL -- Daewoo Shipbuilding & Marine Engineering, a major shipbuilder in South Korea, will apply its smart ship platform to two wind turbine installation vessels, which are under construction on order from Eneti, a Monaco-based company specializing in offshore wind farm construction and services. This is the first case of incorporating state-of-the-art eco-friendly and smart ship technologies into the marine plant field.

A wind turbine installation vessel (WTIV) has specific needs, different from traditional oil and gas-focused offshore operations. Demand for offshore wind power generators is growing thanks to a global trend to accelerate the adoption of renewable energy and reduce greenhouse emissions.

The first wind turbine installation vessel for Eneti is to be delivered in the third quarter of 2024, and the second one in 2025. Generators can be installed up to 65 meters deep. The ship capable of installing offshore wind generators up to 65 meters deep would use seven thrusters and GPS to pinpoint the installation point and lower a jacking system to the seafloor using a giant 2,600-ton crane.

Daewoo Shipbuilding & Marine Engineering (DSME) said the design of NG-16000X from Dutch design and engineering company GustoMSC was combined with DSME's smart ship system and a variety of solutions for the optimal operation of WTIVs. The shipbuilder has developed an autonomous operation system called "DS4" that recognizes the surrounding environment and ships to support safe operation while recommending reasonable operation measures by monitoring operation big data in real time on land.

"The supply deal will be a successful example of applying our digital technology capabilities to the world's best eco-friendly ship for eco-friendly energy production," DSME's research center head Choi Dong-kyu said in a statement on October 21.

DSME and other shipbuilders are trying hard to develop autonomous ship technologies that can replace crew decisions with intelligent and autonomous systems integrating artificial intelligence, Internet of Things (IoT), big data, and sensors that would open an era of next-generation high-value-added ships. DSME aims to launch a large autonomous commercial ship installed with its smart ship platform in 2025. Its test smart ship secured certification from the American Bureau of Shipping (ABS), an international classification society, in October 2021.

Smart ships are expected to revolutionize the landscape of ship design and operations. Along with efficiency in traffic, smart ships can minimize human errors that caused about 70 to 80 percent of marine accidents. Smart shipping can be divided into unmanned ships ruled by an operator from a control center onshore and autonomous ships which use a computer on board that takes decisions about the route, speed, fuel consumption, maintenance and even mooring in the harbor