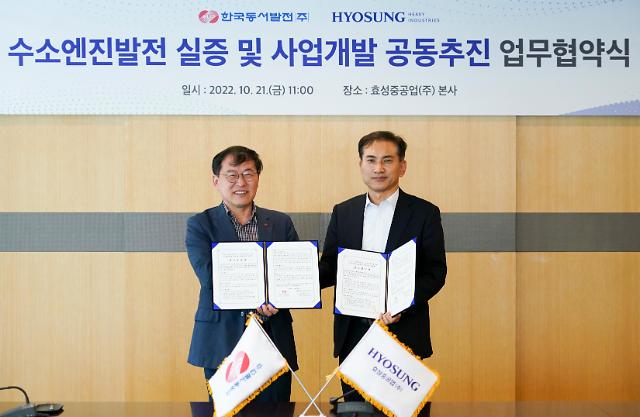 Korea East-West Power Company (EWP) and Hyosung Heavy Industries would explore new markets with a development model by combining renewable energy and hydrogen engines and push for the development of a distributed power system. "We will explore new markets in cooperation with companies with technology to speed up the commercialization of hydrogen," EWP's project division head Cho Sang-ki said in a statement on October 21.

Hyosung's hydrogen engine generator can be fused with renewable energy to supplement the output volatility of renewable energy and contribute to stabilizing the power system. In January 2022, Hyosung Group signed an agreement with the government of South Jeolla Province to produce 200,000 tons of green hydrogen by using an offshore wind farm complex to be built in Sinan, a southwestern county. The group will build water electrolysis facilities that uses electricity to decompose water into oxygen and hydrogen gas.

Hydrogen fuel cell power generation systems are ideal for providing power to microgrids, which are networks of small, isolated smart power grids, in urban environments. SOFC  is an electrochemical conversion device that produces electricity directly from oxidizing a fuel. Due to their extremely high electrical efficiencies and low operating costs, SOFCs are emerging as a fast-growing fuel cell segment.