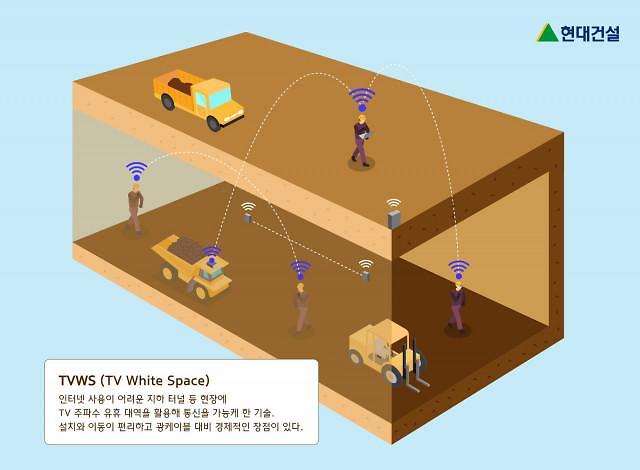 SEOUL -- Hyundai Engineering and Construction, a major builder in South Korea, won government approval to use a new wireless solution that enables undisrupted communication from the surface to deep underground construction sites, using "TV white space," which is unused TV frequencies. The solution with extremely high transmission power will be used to secure the safety of workers.

Previously, long-term evolution (LTE) repeaters were installed for communication between inside and outside the tunnel. However, it was difficult to build a communication network and grasp the status of workers in the underground space. A mobile TV white-space (TVWS)-based communication technology enables Wi-Fi communication throughout the entire tunnel just by installing receivers at regular intervals without the need to extend the communication line.

Hyundai E&C was allowed to demonstrate a TVWS-based communication technology for underground tunnels through a regulatory sandbox policy that exempts regulations on new technology and services. The builder adopted TVWS technology in collaboration with Innonet, a domestic company that has secured TVWS-related patents. The new technology is advantageous in communicating with the ground from deep underground sections. It can communicate with a transmitter at a distance of up to 10 kilometers (6.2 miles) away.

"With (TVWS) wireless communication technology, we can secure the safety of workers and utilize smart construction technology regardless of location, enabling more effective on-site response," an unnamed Hyundai E&C official said in a statement on October 25. The company hopes to incorporate other smart construction technologies through the establishment of wireless internet networks such as providing internet of things (IoT)-based gas and weather sensors.