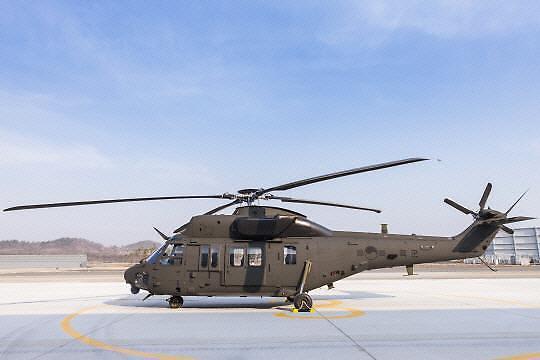 Three prototypes will be made for 46 months, using Marineon, the amphibious variant of South Korea's homemade transport utility model called "Surion," the Defense Acquisition Program Administration (DAPA) said, adding that about 20 marine attack helicopters will be deployed from the late 2020s when KAI completes its system development.

The LAH carrying a 20mm machine gun and four anti-tank missiles or 70mm rocket pods can fly at a maximum speed of 324 kilometers (201 miles) per hour. KAI plans to attach "Cheongeom," a homemade air-to-ground missile. The LAH project is aimed at replacing an aging fleet of light helicopters such as MD500s and AH-1S Cobra. Development will be completed by the end of 2022.

"The development of landing attack helicopters through this project is expected to increase the strength of landing operations and secure the capability of three-dimensional high-speed landing capabilities." Lee Jong-hwa, a brigadier general in charge of DAPA's helicopter project, said in a statement on October 28.

A Marineon chopper crashed on a test flight at a naval airbase in July 2018, killing five soldiers. State inspectors found that poor heat treatment caused a crack in the roto mast provided by a French company. Marine Corps commanders called for the deployment of highly maneuverable and field-proven foreign models, but the defense ministry favored homemade equipment.

KAI would secure core technologies for future aircraft operations and manned-unmanned teaming (MUM-T), which is the cooperative employment of unmanned assets with traditional manned platforms. MUM-T operations combine the strengths of each platform to increase situational awareness, allowing troops to conduct operations that include combat support and intelligence, surveillance, and reconnaissance missions.

A military scheme has been proposed to utilize light attack helicopters for various missions. In March 2021, KAI tied up with Israel Aerospace Industries (IAI) on cooperation for a manned and unmanned teaming system. KAI would demonstrate an operation system combining loitering munitions and helicopters. A loitering munition, also known as a suicide drone, loiters around the target area for some time and attacks once a target is located. The weapon enables fast reaction times against concealed or hidden targets and allows more selective targeting.