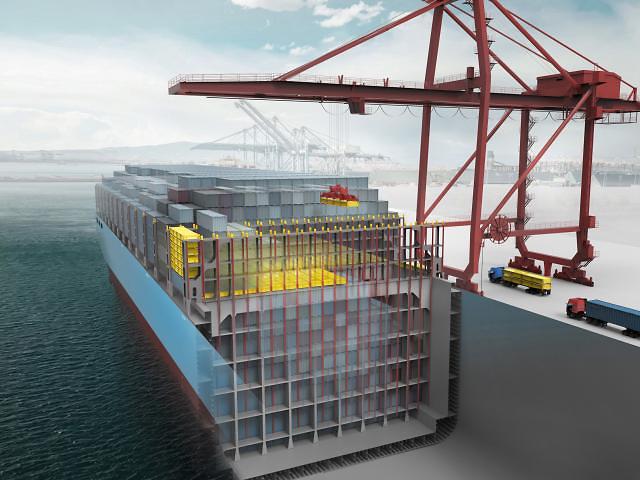 SEOUL -- The world's first lashing-free container ship, designed by South Korea's Hyundai shipbuilding group, has secured design approval from international societies. The ship does not require extra fixing work and uses a new concept device called "Portable Bench" that receives the load of containers stacked on the top of the deck and delivers it to the hull.

Container lashing is the process of securing containers together on board a ship to prevent containers from moving from their places or falling off into the sea during rough weather or heavy winds. Traditionally, containers are loaded inside the ship's cargo warehouse and closed with hatch covers to load containers on them again. It is necessary to fix containers loaded on hatch covers to a steel structure called a lashing bridge.

Hyundai Heavy Industries (HHI) eliminated lashing bridges and hatch covers and extended a device called "Cell Guide" onto the deck to allow the stacking of vertically aligned containers inside the cargo hold. Lashing is not required because an extended cell guide fixed containers loaded on the top of the deck.

The shipbuilder said its lashing-free container ship has obtained design approval from the American Bureau of Shipping (ABS), a classification society based in the United States, and the Liberian Flag Administration. "Lashing-free container ships are a new concept technology that can fundamentally eliminate lashing-related work, which is a big challenge in the container ship industry, and the loss of cargo," HHI's research center head Joo Won-ho said in a statement on November 1.

The application of portable benches would greatly improve the convenience and efficiency of container unloading operations, the shipbuilder said, adding that it has completed domestic and foreign patent applications for lashing-free container ships and portable benches.