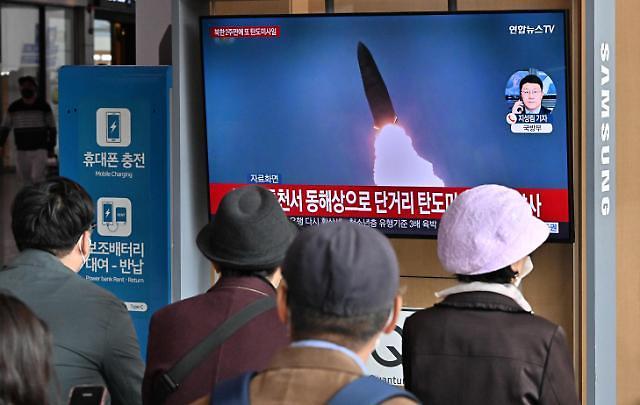 SEOUL -- An unprecedented exchange of intimidating missile shots into imaginary targets near territorial waters ratcheted up cross-border tensions on the Korean peninsula, with both sides flexing their muscle with pledges of strong retaliatory action that could lead to a limited conflict at any time like North Korea's artillery attack on South Korea's front-line island in 2020.

South Korean fighter jets fired three air-to-surface missiles into high seas north of the eastern sea border on November 2, hours after a North Korean missile fell into high seas 26 kilometers south of the maritime demarcation line, triggering air raid sirens on Ulleung Island, according to the South's Joint Chiefs of Staff (JCS). It marked the first launch of missiles close to each other's territory since the end of the 1950-53 Korean War.

The air raid alert that sent some Ulleung residents fleeing into basements and shelters was issued in six years and nine months. The launch of a North Korean long-range missile in February 2016 triggered air raid sirens on front-line islands in the Yellow Sea.

South Korea accused North Korea of firing at least 25 missiles in various directions for about ten hours. A short-range ballistic missile launched from North Korea's missile base in Wonsan at 8:51 am (2351 GMT) fell in an area, 57 kilometers (35 miles) east of the South's eastern city of Sokcho.

In return, South Korea's F-15K and KF-16 jets fired three precision-guided missiles into a target north of the sea border at a well-calculated distance almost equivalent to that of the North's missile. The South's missile launch followed a high-level security meeting chaired by President Yoon Suk-yeol, who condemned the North's missile provocation as an act equivalent to actual encroachment on South Korea's territory and called for "quick and stern" counter-action.

The type of South Korean missiles was not disclosed, but South Korean fighter jets are armed with SLAM-ER advanced stand-off precision-guided, air-launched cruise missiles capable of attacking targets, which are up to 270 km away. The U.S.-made missile, based on GPS and infrared imaging for its navigation and remote control, can strike both moving and stationary targets.

North Korea's missile provocation came on the third day of "Vigilant Storm," a massive joint air exercise involving about 240 American and South Korean jet fighters that began on October 31, with USS Key West (SSN-722), a Los Angeles-class submarine, anchored in the southern port city of Busan. Pyongyang always takes a fussy attitude to such exercises and regards them as a rehearsal for war.

Since Yoon took office in May 2022, North Korea has stepped up provocations with a series of missile launches and even gunfire from artillery units that sent tensions running high in and around front-line islands in the Yellow Sea. The North's artillery attack in 2010 killed four people on South Korea's front-line Yeonpyeong Island and briefly triggered concerns of a full-scale conflict.