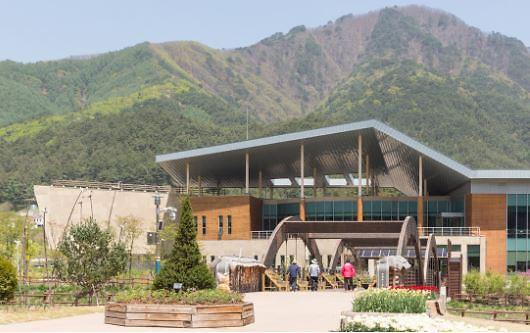 [Courtesy of the Baekdudaegan National Arboretum ]


SEOUL -- LG Uplus has launched an AI-based smart radar service at South Korea's only seed vault, which is run by a state arboretum in a mountainous area to store seeds donated by institutions from all over the world and preserve biodiversity. Smart radar sensors were installed at the seed vault's entrance and archives to automatically detect the movement and location of intruders. A smart radar system in a toilet used by visitors can quickly recognize safety accidents.

The seed vault in the National Baekdudaegan Arboretum in Bonghwa, about 150 kilometers (93 miles) southeast of Seoul, is an underground facility with a triple iron plate structure. It is one of two permanent plant seed preservation facilities in the world, along with one in Norway. South Korea's seed vault with a capacity of more than two million seeds preserves a wide variety of wild plant seeds threatened by climate change with its temperature constant year-round at 20 degrees Celsius below zero.

Norway's seed vault on the island of Spitsbergen in the remote Arctic Svalbard archipelago provides food crop seeds to the last survivors of doomsday. The seed vault in Norway was built on the island of eternal frozen earth permafrost and its facility is about 130 meters above sea level and has been tunneled 120 meters into the mountain.

LG Uplus (LGU+) said that its AI-based smart radar service monitors security accidents and intrusions in real time. It detects blind spots that CCTVs cannot see and various movements with 98 percent accuracy even in dark environments. Since human movements are expressed in pictograms, there is no fear of infringement on privacy. A pictogram is a graphic symbol that conveys its meaning through its pictorial resemblance to a physical object.

"It is meaningful to launch the U+ smart radar service at the arboretum,, which is South Korea's leading biodiversity preservation agency," Jeon Seung-hoon, an LGU+ official in charge of smart infrastructure business, said in a statement on November 3. LGU+'s platform consists of small monitoring equipment and a remote control solution. A chipset can transmit and receive high-quality data.

The 77GHz frequency band used for autonomous vehicles was switched to indoor use. After radar sensors scanned the site and removed data noise, AI analyzes images, finds abnormalities, and transmits them to the cloud server so that remote managers can control the situation quickly in real time.

High-resolution cameras provide clear images but they might be affected by rain, snow, darkness and fog. Light detection and ranging (LiDAR) sensors using laser beams are costly. Radars cannot acquire precise images because people and things can be perceived only by dots. With AI algorithms incorporated, radars expanded the rage of applications to autonomous vehicles and other fields such as security, defense, healthcare, and smart factories.

Smart radars can be useful for toilets and changing rooms where CCTV is difficult to reach. They analyze electromagnetic waves, identify, and detect the location and speed of an object. Smart Radar System, a startup developing image radar solutions for autonomous cars and industrial applications, has developed South Korea's first high-resolution 4D image radar that can detect an object's distance, height, depth, and speed in real-time.