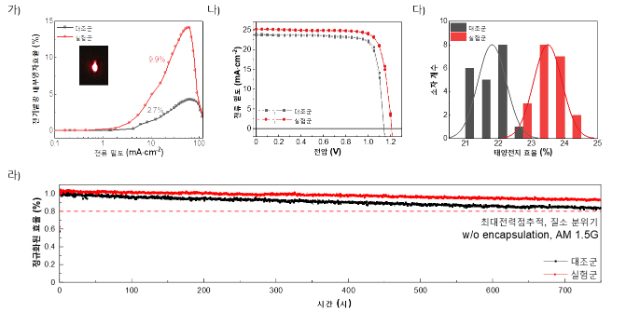 
SEOUL -- South Korean researchers have developed highly efficient and stable perovskite solar cells using a special technique to create a layer between cell components that would prevent energy loss when solar cells absorb sunlight and convert it to electricity.

Currently, silicon-based solar cells are widely used but their maximum energy conversion efficiency is about 30 percent based on the assumptions of perfect sunlight absorption and no energy loss due to non-radiative charge-carrier recombination. The non-radiative recombination process is an energy loss process caused by defects in the cell and charge carriers that are bottlenecked in layers between electrodes and solar cells.

Perovskite is an alternative material to silicon wafers used in solar cells. Its crystalline structure greatly increases the efficiency and stability of converting sunlight into electricity. The highest energy conversion efficiency rate achieved by perovskite cells is about 24 percent. The crystalline material is cheap to make by combining lead, iodine, bromine, and other abundant materials.

According to the National Research Foundation of Korea, researchers from the Gwangju Institute of Science and Technology (GIST) developed highly efficient and stable perovskite solar cells using a non-conjugated polymer to create the non-conductive layer that induces the accelerated creation of crystalline and does not affect the absorption of sunlight. An ionic functional group was added to effectively extract and deliver charges.

The new perovskite solar cells showed a 24.4 percent energy conversion efficiency rate. They were also very durable, with a seven percent deficiency rate after about 700 hours of testing under direct sunlight.

"Through this research, we were able to find a clue to the source problem of performance deterioration. We hope this technology to be used in various sectors including the development of building-integrated solar cells and things involved in people's everyday lives," researcher Lee Kwang-hee said in a statement on November 4.