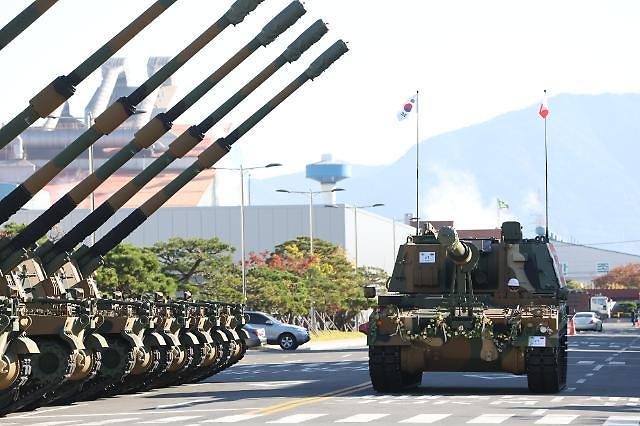 
SEOUL -- Norway has signed an option contract with South Korea's Hanwha Aerospace to purchase four more K9 self-propelled howitzers and eight ammunition resupply vehicles for delivery over the next two years. As the northernmost NATO member in Europe, the Nordic country sharing a land border with Russia has increased its defense budget to compensate for the shipment of howitzers and other military equipment to Ukraine.

Hanwha Aerospace said that the latest contract signed on November 4 through teleconference was part of options related to the 2017 contract with the Norwegian Defence Material Agency (NDMA) to provide 24 K9s and six K10 ammunition resupply vehicles.

Kwak Jong-woo, head of Hanwha Aerospace's land systems business division, hailed the option contract as "a key milestone" for enhanced defense cooperation between Hanwha and Norway. "Norway is a key pillar of the expanding community of K9 user countries, and we will devote our sincere effort to implement the option contract and contribute to enhancing Norwegian defense capabilities," he said in a statement on November 8.

Hanwha Defense and Hyundai Rotem have tried to bolster their bid for Norway's defense spending and modernization program by establishing strategic partnerships with Kongsberg Defence & Aerospace (KDA), a Norwegian supplier of defense and space-related systems and products. In Norway, Hyundai Rotem's K2 tanks are competing with the German-made Leopard 2A7, which is one of the best main battle tanks in the world.

In a structural change aimed at establishing an integrated defense business division, Hanwha Aerospace has absorbed Hanwha Defense, a defense contractor known for world-class self-propelled howitzers and infantry fighting vehicles, as well as the defense business of Hanwha Corp., a manufacturing and trading company that produces munitions, navigational systems for guided weapons, and lasers.

Hanwha Aerospace, an aircraft parts maker involved in the production of homemade space rocket engines, has vowed to become a global defense solution company like Lockheed Martin, a U.S. aerospace, arms, defense, information security, and technology corporation. Hanwha Aerospace is a key member of Space Hub, a group-wide team led by Kim Dong-kwan, that combines different products or services such as satellite components.