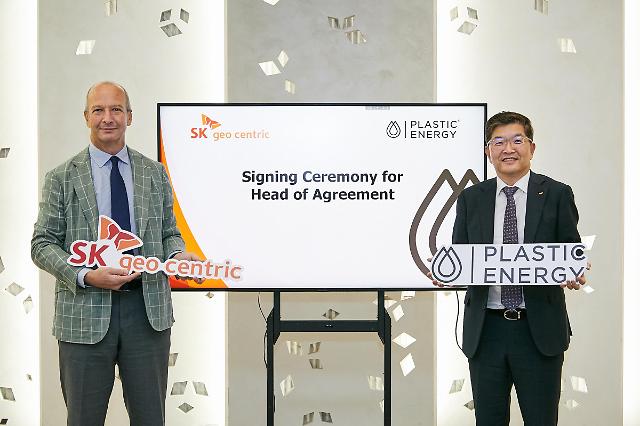 SK geo centric (SKGC) will build a pyrolysis plant in a recycling cluster in the southeastern industrial city of Ulsan by the second half of 2025, using Plastic Energy’s patented recycling technology that turns difficult-to-recycle plastic waste into a valuable raw material that can be used to create virgin-quality polymers.

Under a preliminary agreement, the two companies would promote a joint project in the metropolitan area and expand their pyrolysis business in Asia. SKGC will build a post-treatment plant with an annual production capacity of 100,000 tons. "We can accelerate the creation of a recycling cluster in Ulsan through cooperation with Plastic Energy with excellent technology in the field of pyrolysis," SKGC CEO Na Kyung-soo said in a statement on November 16.

Plastic Energy CEO Carlos Monreal described South Korea as an important market for the chemical recycling of end-of-life plastics and said that his company would help SKGC realize a unique vision of deploying different technologies in one place for different kinds of plastic recycling.

In June 2022, SKGC signed a deal with Suez SA, a Paris-based utility company, and Loop Industries, a Canadian plastic recycling company, to set up a chemical recycling joint venture plant in France with an annual production capacity of 70,000 tons. A month later, the South Korean company signed a strategic cooperation agreement with France's environmental service company Veolia to tap a rapidly growing plastic recycling market in the Asia-Pacific region.