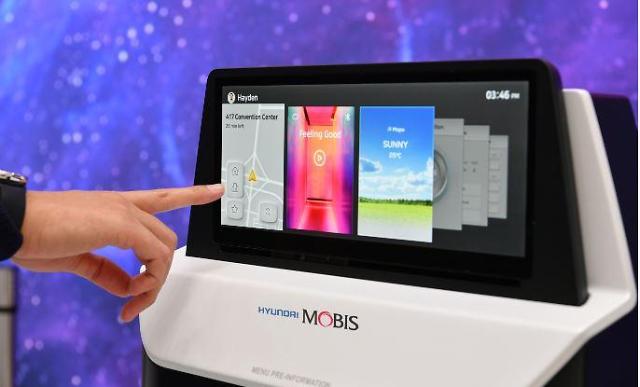 SEOUL -- A new technology developed by Hyundai Mobis, the parts-making wing of South Korea's Hyundai auto group, allows users to choose the menu they want with just gestures and choose it with one touch. The frequently used menu pops up in the direction of users just by touching their hands close to the vehicle display while driving.

The use of vehicle infotainment (IVI) systems will become more convenient by minimizing the driver's movements, preventing visual dispersion, and enhancing the convenience and safety of drivers, Hyundai Mobis said, adding that It is the first case in the world to apply infrared ray sensors to in-vehicle location sensing.

The new technology dramatically improves the hassle of having to manipulate the touch screen several times. It is possible for users to apply various scenarios depending on the direction and location of their approach.

Hyundai Mobis said it has minimized the number of sensors by utilizing time-difference light-emitting sensing technology. An automatic screen correction function based on recognition algorithms was introduced to increase the accuracy of hand shape and direction recognition. It is also equipped with responsive user experience and user interface solutions that recognize sensing distances and locations so that users can use them intuitively.

IVI systems, which are seen as the heart of connected cars, provide various features such as navigation, self-diagnostics, entertainment and vehicle controls. Hyundai Mobis has accelerated the development of sensors, cameras and other parts for autonomous vehicles and future cockpit technologies.

In October 2022, an integrated next-generation infotainment platform, developed jointly by Hyundai Mobis and its Swiss partner Luxoft made its debut at an automotive trade fair in Germany. The infotainment system was introduced as a future platform that integrates six screens including a digital gauge cluster system, an augmented reality (AR) head-up display, a center stack display (CSD), and three passenger displays.