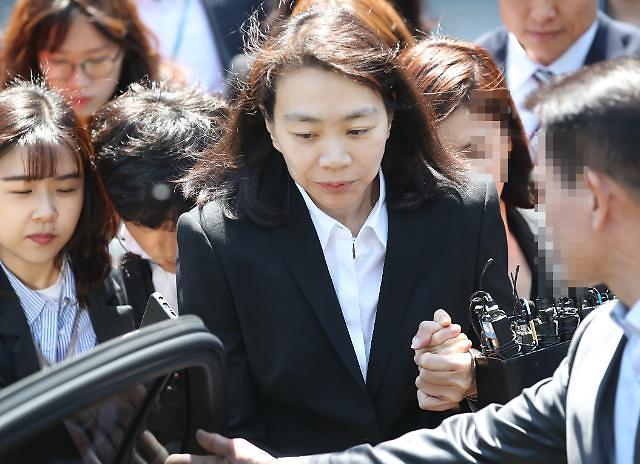 SEOUL -- Cho Hyun-ah, a former Korean Air vice president known for a "nut rage" incident in 2014, was allowed to divorce her husband who filed a divorce suit four years and seven months ago with accusations of family violence and verbal abuse. Cho, 48, should pay 1.33 billion won ($994,233) in property division, but she acquired her legal status as a caregiver for her children.

In its ruling on November 17, a family court in Seoul accepted a divorce suit filed by Cho and her husband respectively. Cho was ordered to pay 1.2 million won per child every month for child support. It was not known immediately whether Cho or her husband appealed.

Cho, 48, married her elementary school classmate identified by his family name, Park, in October 2010 and has twin children. The husband who runs an orthopedic clinic in southern Seoul filed a divorce suit in April 2018 to end their marital life allegedly marred with violence, violent language, and child abuse.

The first daughter of Hanjin Group's late chairman Cho Yang-ho resigned as Korean Air's vice president after she threw a tantrum aboard a plane in December 2014. She became enraged when a flight attendant served her some nuts in a bag on board a flight that was forced back to the gate while taxiing to the runway. She was given a prison sentence on conviction of violating aviation safety laws, but an appeals court suspended her sentence in May 2015.

In 2019, Hanjin was hit hard by a series of scandals after the late chairman's second daughter,  Cho Hyun-min, threw a glass cup and sprayed plum juice during a business meeting with advertising agency officials. The incident fueled public anger, leading to multiple investigations into the late chairman, his wife and children on charges of creating a slush fund, evading taxes, bringing in luxury foreign goods illegally, abusing and assaulting company employees and others.

At a meeting of shareholders in 2020, Hanjin Group chairman Cho Won-tae scored a comfortable victory over an opposing alliance led by his elder sister to retain control over the scandal-stricken conglomerate in a leadership contest that followed the sudden death of their father a year ago. Cho Hyun-ah had criticized her brother for running the group without prior consultations with family members, but her argument failed to win over a majority of neutral shareholders.