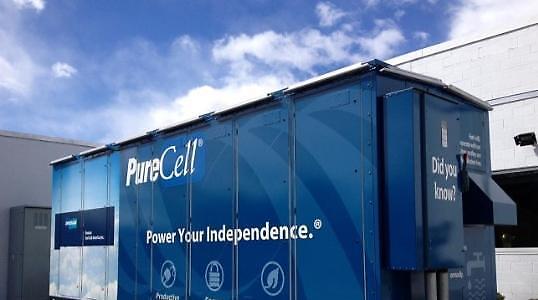 SEOUL -- Doosan Fuel Cell, the clean energy wing of South Korea's Doosan Group, tied up with its Chinese partner, ZKRG Smart Energy Technology, to export 105-megawatt hydrogen fuel cells for power generation by establishing a joint venture. 50MW will be exported in the form of finished products by 2024 and 55MW in the form of parts by 2026.

Doosan Fuel Cell and ZKRG will cooperate in marketing and discovering business opportunities in China. In September 2021, ZKRG supplied Doosan Fuel Cell's four 440kW hydrogen fuel cells used as a distributed power source to supply electricity as well as heat for cooling and heating to apartments and buildings in Foshan, Guangdong. Distributed energy systems, which generate and store power near the point of consumption, can accommodate a variety of renewable and alternative energy sources.

"If demand is secured above a certain level in the future, we will be able to accelerate supply expansion through the establishment of a hydrogen fuel cell plant and a service corporation in China," Doosan Fuel Cell CEO Je Hu-seok said in a statement on November 21.

Hydrogen fuel cells use hydrogen as fuel to produce electricity. Because hydrogen fuel cell power generation systems are much smaller than thermal power plants or hydropower plants, they are ideal for providing power to microgrids, which are networks of small, isolated smart power grids, in urban environments.