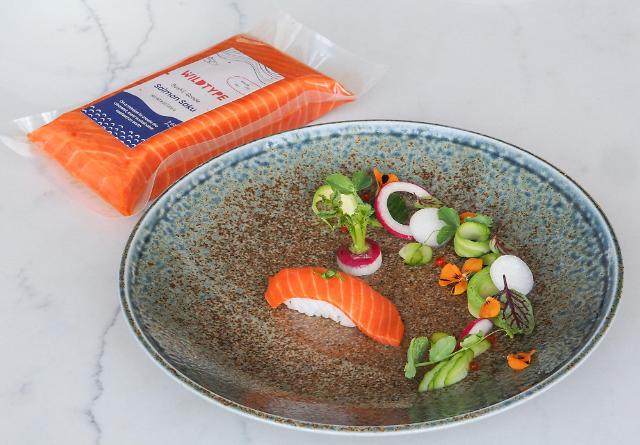 SEOUL -- In an effort to expand its investment portfolio for sustainable food, a promising next-generation food sector, SK Inc., the strategic investment arm of SK Group, has invested $7 million in Wildtype, a U.S.-based producer of salmon cultivated from cells. Meatless Farm, a Dutch sustainable food company funded by SK Inc. has secured $7 million from a venture capital firm based in Seoul.

Wildtype produces cultivated salmon, which stands apart from other seafood alternatives with its natural appearance, texture, and taste similar to conventional fish. It is working towards launching commercial products like salmon steak and fillet in 2023. The company has signed supply agreements with major food companies including Pokeworks, a U.S.-based franchise poke brand.

With its latest investment, SK Inc. said it has established a rounded investment portfolio in sustainable food, with Meatless Farm in plant-based meat, Perfect Day and Nature’s Fynd in precision fermentation protein, and Wildtype in cell-cultivated meat.

"The process of overcoming climate change could also serve as a breakthrough opportunity in identifying new values for the future," SK Inc.'s green investment center head Kim Moo-hwan said in a statement on November 24. "In preparing for the explosive growth of the green industry, SK Inc. will work towards taking the market leadership, including sustainable food."

SK Group has actively expanded its alternative food business through strategic partnerships with domestic and foreign and domestic companies such as China's Joyvio Group, which is the largest producer of blueberries and kiwis, and Nature's Find which developed an alternative protein source using microorganisms and self-fermentation technology.

The domestic alternative meat market is still small, but market researchers forecast rapid growth. According to data from the Korea International Trade Association(KITA), alternative meat will account for more than 30 percent of the global meat market by 2030 and 60 percent by 2040, as concerns over animal welfare and food security spur the global demand for meat alternatives.

Many companies and researchers in South Korea and other countries are trying to establish a new paradigm for the mass production of plant-based or cultured meat by lowering costs through technological advancements. Potential factors of consumer acceptance are healthiness, safety, nutritional characteristics, sustainability, taste and lower prices.

Plant-based meats imitate meat and are most commonly made from soybeans, mushrooms, mung beans, or wheat gluten. Cultured meat is produced by in vitro cell culture of animal cells. The production of cultured meat used to be expensive, but costs have been lowered through technological advancements. Biomass fermentation uses high-protein content and the rapid growth of microorganisms to make large amounts of protein-rich food.